The military has appealed to the government to take urgent steps to rehabilitate some abandoned residential facilities at the Fourth Battalion Infantry (4BN) Brigade complex in Kumasi. 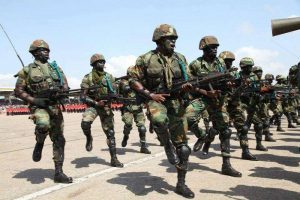 The facilities, built in 1997 to house the soldiers, had over the past decade been rendered uninhabitable due to serious structural defects.

Lieutenant Colonel Augustine Arhin, the 4BN Commander, said these could accommodate about 70 families.

Speaking during a visit to the place by the Ashanti Regional Minister, Mr. Simon Osei-Mensah, he said the development had created enormous discomfort for the officers and needed to be tackled.

The Minister was there as part of his tour of security installations in the region to learn at first hand the challenges and how to resolve these to enable the security agencies to operate efficiently.

Accompanied by Mrs. Elizabeth Agyemang, the Deputy Regional Minister, and Brigadier-General Cosmos Alhassan, General Officer Commanding the Central Command, he had earlier inspected the Central Command Headquarters project, which is set to be completed next year.

It would replace the current structure, which predates World War II.

Lt. Col. Arhin pledged the loyalty of the military, its total commitment defend the nation and assist in providing vital social services to improve the living conditions of the people.

Mr. Osei-Mensah saluted the military for the high sense of discipline and professionalism that had won international admiration.

He said the nation was proud of the enviable niche the Ghana Armed Forces (GAF) had carved for itself and urged it to continue with the good job.

Brigadier-General Alhassan applauded moves by the government to enhance the operational efficiency of the GAF.

The Regional Minister also interacted with officers of the Ghana Police Service and the Ghana National Fire Service.

He assured them of the government’s determination to ensure that they were adequately equipped to perform.

Their conditions of service would also be improved, he added.