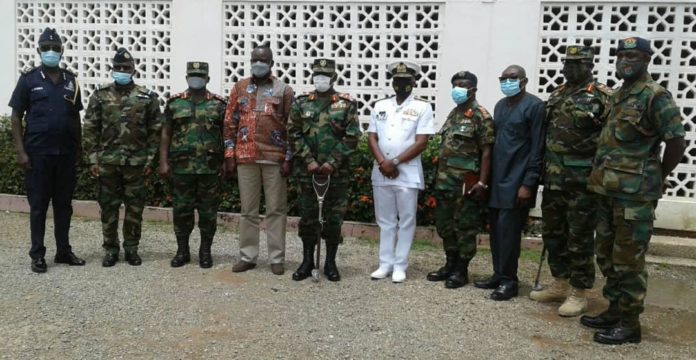 While commending the CDS for establishing a Military Battalion in the region, the Minister said the Upper West Region shared border with Burkina Faso and was, thus, prone to activities of terrorists.

Dr Bin Salih made the appeal when a team of the military high command led by Lieutenant General Obed Boamah Akwa, the CDS, called on him to officially announce their presence in the region.

The team, including the Chief of Naval Staff, Chief of Army Staff and Chief of Defence Intelligence, among others, was in the region to hold a conference to discuss the effective ways to maintain peace in the country, particularly, during, before and after the 2020 general elections.

Dr Bin Salih acknowledged the role of the Ghana Armed Forces in safeguarding the peace and security in the region and the country at large and expressed the hope that the 2020 general elections would be violence-free.

He gave the assurance that the Regional Coordinating Council would collaborate with the security agencies, including the Ghana Armed Forces to ensure that peace and security were maintained in the region.

Lieutenant-General Akwa noted that the Army chose to hold the conference in the Upper West Region due to the relative peace in the area.

He assured the Minister that he would be an ambassador of the region, propagating its humanitarian and peaceful nature.