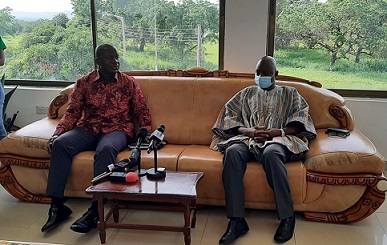 Mr Samuel Abu Jinapor, the Minister of Lands and Natural Resources, has called for vigilance in mining activities to ensure effective regulation and protect the natural resources in the Upper East Region.

He said the Upper East was gradually becoming the mining headquarters of the country, following its natural mineral resource deposits.

“The Upper East Region is promising to become a very robust mining hub for our country.

“There is granite here, there is quarrying taking place, and there is gold in commercial quantities. There are already some intense mining activities happening here in the Upper East Region.”

That, the Sector Minister said was at the levels of both small and large scale mining, emphasising that “It, therefore, calls for a lot of alertness. I must commend the Regional Minister for his sense of pro-activeness.”

Mr Jinapor, who is also the Member of Parliament (MP) for the Damango Constituency, made the remarks when he called on Mr Stephen Yakubu, the Regional Minister as part of his day’s working visit to the Region.

The Sector Minister is scheduled to interact with members of the Regional House of Chiefs, meet officials of the Sector Agencies, visit mining companies in the Talensi District and hold a durbar with the Association of Small Scale Miners.

Mr Jinapor said the thrust of President Akufo-Addo’s strategy in respect of the emerging mining hubs in the country was for them to ensure that all the rules and regulations were respected.

He reiterated the need for alertness, saying “So that we don’t get ourselves in the situation where issues get out of hand before we work to revert it.”

He said in the Upper East Region, all the regulations, including strengthening the Minerals Commission among others, would be strictly followed to nib mining illegalities in the bud and generally found a well-regulated system.

“Realising the vision of the President of retaining the value chain in the localities, first of all in the country and in the Regions, is key to me, and it is key to the President, and I am very happy that we are here,” he said.

The Regional Minister, on his part, was confident that things would be done differently in the Region, being the newly emerging area with gold deposits and the benefits would be for the residents.
“I am happy so far with how things are moving,” he said.

He said the Region was unique with enormous natural resources, including water and forest reserves and noted that the Coordinating Council would work closely with the Ministry of Lands and Natural Resources to enable them to succeed in their operations in the Region.