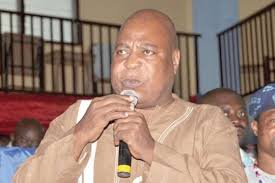 Mr Ismael Ayittey, the Greater Accra Regional Minister has called on commercial entities operating in Accra to support in rehabilitating the Ga Mantse Palace and the Ga Traditional Council offices.

The Regional Minister said the edifices were abandoned and deteriorated due to the numerous quarrels and conflicts that ensued over the years.

He said with the induction of the new Ga Mantse, it would be prudent for corporate bodies including; the financial institutions operating within Greater Accra Region and beyond to assist the Council to put the structures in good shape.

Mr Ayittey made the call in Accra when he was accompanied by selected Metropolitan Chief Executives in Accra to pay a courtesy call on King Tackie Teiko Tsuru II, the new Ga Mantse to congratulate him on his position.

King Tackie Teiko Tsuru II known in private life as Dr Kelvin Nii Tackie, was enstooled as the new Ga Mantse on December, 2017 and inducted into the Ga Traditional Council on Saturday, May 9, 2020, in the presence of some major chiefs under the paramountcy.

The Regional Minister advised the new Ga Mantse to use his position to bring all factions together and forge ahead towards peaceful existence.

He said the Ga Traditional system cannot enjoyed development without peace, stressing that the induction of the new Ga Mantse should be the beginning of good fortunes for the Ga community.

He charged the Council to work assiduously to resolve all issues in the community to pave way for developmental projects.

Mr Ayittey said government through the Ministry of Chieftaincy had supported the Council in its programmes and would continue with the gesture.

King Tsuru II in response thanked the Minister and his entourage for the visit and pledged to foster unity among the people of Ga community.

He also pledged to serve the people, promote education and the Ga heritage, adding that “in unity comes strength and development”.

King Tackie Teiko Tsuru II, 46, hails from the Nii Teiko Tsuru, We of the Akropong Royal House of the Ga Royal Stool, with his Mother from the Lantey Djan We/Naa Oyoe We of Abola Piam.

He holds an MBA in Strategic Management and Consulting from the Kwame Nkrumah University of Science and Technology School of Business.