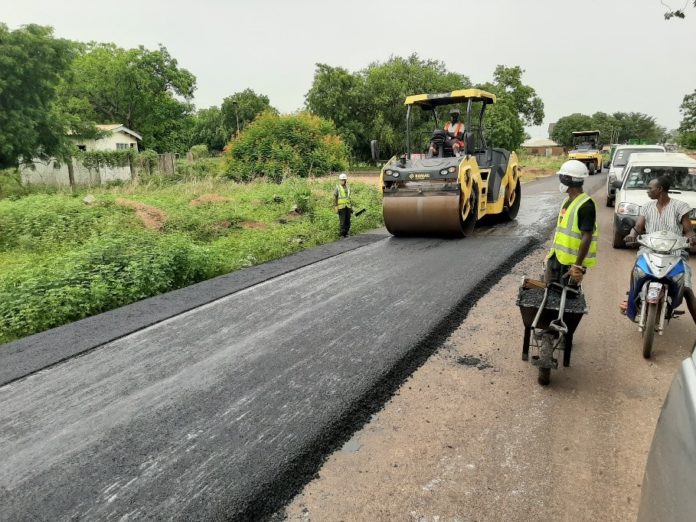 The Deputy Minister of Lands, Forestry and Natural Resources, Mrs Naana Eyiah Quansah, has cut the sod for the construction of a three-Kilometre feeder road from Gomoa Ayensuadze to Gomoa Abaasa to join the Winneba/Swedru main trunk road.

The Minister, also the Member of Parliament (MP) for Gomoa Central, was accompanied by Mr Benjamin Kojo Otoo, the District Chief Executive.

Mrs Eyiah Quansah said the road needed to be fixed to facilitate the carting of farm produce from the area to market centres.

The government would ensure that majority of feeder roads in hinterlands were tarred to aid the transportation of goods and services, she said.

She said the contract was awarded in May this year and the contractor was expected to complete the project within one year or less.

The MP said negotiations had been made with the contractor to recruit local artisans and labourers to create jobs for the youth in the town.

She stated that the Gomoa Central District had been slated to benefit from the 88 district hospitals recently announced by President Akufo-Addo to be constructed across the country and assured that the sod-cutting ceremony would be performed this July for works to begin.

The Gomoa Awomerew to Gomoa Ekwamkrom road on the Winneba-Junction/ Agona Swedru trunk road had been given on contract for refurbishment.

According to the MP work was steadily progressing on a polyclinic project at Gomoa Abonyin to reduce referral of cases to Winneba and Agona Swedru among other referral hospitals.

Mrs Eyiah Quansah said the Government had kept faith with the chiefs and people of Gomoa Central within its three and half years in office and urged them to reciprocate the gesture.

She called on residents to vote massively for her and President Akufo-Addo to complete the unfinished business started in 2017.

The MP asked the people to actively participate in the voter registration exercise to avoid being disenfranchised.

Oseadieyo Ayeboafo Atuah, the Managing Director of Nana Kwame Atuah Construction Company limited, said the three-kilometre road from Gomoa Ayensuadze to Gomoa Abaasa and the four kilometre Gomoa Dahom to Gomoa Lome would be completed within a year.

He assured the people that workers would be recruited from the towns to create jobs for them.

Nana Osuan Asare IV, Chief of Gomoa Abonyi, commended the MP and President Akufo-Addo for the numerous infrastructural developments for the area.

He pledged to ensure that his people fully participated in the voters’ registration exercise, which began on Tuesday, June 30.

Nana Akye Panyin IV, Chief of Gomoa Ayensuadze, expressed appreciation to the Central Government for commencing the tarring of the road.

The Chief, therefore, appealed to the MP to replace a canoe she procured for farmers of the town to cross the Ayensu River to their farms when the river overflowed its banks during the rainy season, which was damaged.

The Chief expressed appreciation to the Central Government, MP and Gomoa District Assembly for bringing development projects into the town to promote quality living standards.

Construction of 32 TVET Centres To Begin