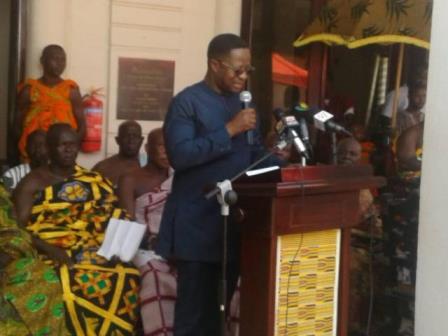 Mr John Peter Amewu, the Minister of Lands and Natural Resources, on Friday, launched the Kyebi Reclamation Project to restore 18 mined areas that have been degraded by the activities of illegal miners.

He said his outfit would collaborate with the Okyehene Foundation, the Rebecca Akufo-Addo Foundation, Richie Foundation, Ministry of Environment, Science, Technology and Innovation, Local Government as well as other Ministries constituting the Ministerial Taskforce against illegal mining, to find a suitable strategy to reclaim the degraded areas.

“As a result of illegal mining over the years, about 238,000 kilometre square of lands, constituting more than four per cent of the country’s surface lands had been degraded,” Mr Amewu noted.

He said it would require collaborative approach from all the stakeholders to restore the degraded areas to their natural state.

Mr Amewu said the government was using a multi-stakeholder approach to address the menace of illegal mining and urged all well- meaning Ghanaians to support the laudable effort.

He said a committee constituting the major stakeholders would be formed to address the issue.

The Minister said there would be constant interactions among the stakeholders to find a suitable approach to handle the situation in order to protect the natural resources and the environment from further degradation.

Osagyefuo Amoatia Ofori Panin, the Okyehene and President of the Eastern Regional House of Chiefs, commended the Nana Addo Dankwa Akufo-Addo led government for taking the bold initiative to halt illegal mining and protecting the environment.

He said the President had shown high commitment and sensitivity towards protecting the environment.

He pledged his unflinching support to the government to end the spate of illegal mining in the area.

He noted that the reclamation exercise, which would involve planting of trees and refilling of mined areas, would create jobs for the youth.

Asagyefuo Amoatia Ofori Panin lauded President Akufo-Addo for putting his job on the line to fight illegal mining despite threat from a section of the public to vote against him in the next election.

He said the President’s bold decision would inure to the benefit of the entire citizenry and urged him to continue the right cause.

The launch attracted traditional rulers, heads of some key Ministries involved in the fight against illegal mining and the public.

Mr Amewu and his entourage would visit some of the degraded area to have first hand information on the extent of damage caused by the activities of illegal miners.
GNA/Newsghana.com.gh

Don’t sell lands without the knowledge of Okyehene – Chiefs told