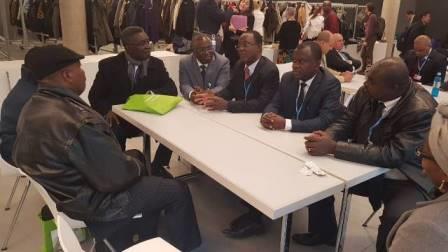 Professor Kwabena Frimpong-Boateng, Minister of Environment, Science, Technology and Innovation has described the just ended UN Conference of Parties (COP23) on Climate Change that closed on Friday, November 17 in Bonn, Germany as the biggest so far.

“This has been a very big COP, the biggest so far” he told the GNA in Bonn, Germany when expressing his observations on COP23.

The previous COP22 held in Marrakech, Morocco from 7-18 November 2016, presided over by Salaheddine Mezouar, the Moroccan Minister of Foreign Affairs and Cooperation, attracted about 20,000 participants.

COP23 featured various plenary meetings, meetings of groups of the Convention and Protocol bodies, High level Ministerial segments and many more events including exhibitions of the various participating countries while delegates discussed and talked around the topics of climate change mitigation, and adaptation and on how to help the vulnerable countries including Africa and the Island States like Fiji survive climatic effects.

There were other side events involving activists and actors who gather at one side within the Bula Zone on the UN Campus in Bonn, as well as the Bonn Zone, which is further apart, to make comments and statements on the need to accelerate actions in cutting down emissions and committing further finances to mitigate climate change impact.

Speaking in an interview with the GNA in Bonn, Prof Frimpong-Boateng commended the Ghanaian delegation who participated in COP23 for doing very well, in representing Ghana at such a great event.

He also commended the media representatives, made up of the GNA, GBC Radio and Daily Graphic reporters who attended and covered the proceedings of COP23, saying, they had done tremendously well, by transmitting the news on the conference back to Ghana to inform the citizenry.

He however said the Ghanaian delegation that attend the COP needed to prepare themselves properly before they participated in such global meetings so that they could well present the climate issues confronting Ghana more adequately.

The NDCs fall under the Intended Nationally Determined Contributions (INDCs), a term used under the United Nations Framework Convention of Climate Change (UNFCCC) for reductions in greenhouse gas emissions that all countries which signed the UNFCCC were asked to publish in the lead up to the 2015 COP 21 held in Paris, France.

The NDCs were the first greenhouse gas targets under the UNFCCC that applied equally to both developed and developing countries.

Together, China and US, constitute 38 per cent of total global emission, with China alone emitting total of 20 per cent.

India that has a Global share of GHGs emission at 4.1 per cent, ratified the Paris climate agreement in October 2016.

Still speaking with the GNA, Prof Frimpong-Boateng noted that the climate was being destroyed not because of Africa’s own activities, but the activities of rich countries “and therefore we need them to help us.

“We are not coming here to beg, this is the agreement that we have signed with them and we need their help.

“After all we are here because of our country. The climate is being destroyed not because of our own activities. This is the agreement that we have signed with them and we need their help. But before we can get that help we need to prepare ourselves so that we can present our case,” he said.

The Minister therefore, urged Ghana’s delegation that attended the COP, to meet regularly after the COP to access, monitor and evaluate what had been done so far and work throughout the year so that at the next COP “we will be able to present something that is coherent and gain something for Ghana”.

“There are so many countries that need help. And therefore, Ghana has to be prepared so that we get the resources needed to help our country,” Prof Frimpong-Boateng noted.

Meanwhile, at COP23, the common message from all sides was that, action to get on track towards the objectives of the Paris Climate Change Agreement, and to ultimately achieve the 2030 Agenda of Sustainable Development Goals was urgent, and that time was really running out and so everyone must do much better, together, to drive climate action further and faster ahead.

The following list included announcements made during COP23 to drive the world further, faster and together to the destination.

Among the major announcements made at the end of the COP23 were the need for funds to support the poorest and most vulnerable, whose plight had been brought into sharp perspective by this year’s extreme weather, and the InsuResilience Initiative’s additional USD
125 million from the German Government to support provision of insurance to 400 million more poor and vulnerable people by 2020.

Germany and Italy’s contribution had now made the Fund to surpass its 2017 target by over USD 13 million and now stands at a total equivalent of USD 93.3 million dollars.

Again, Germany and Britain were to provide a combined amount of USD 153 million to expand programmes to fight climate change and deforestation in the Amazon rainforest.

COP23 ended with delegates around the globe hoping to ensure greater momentum for the Paris Agreement and to raise the level of ambition needed to address global warming at the two week event.