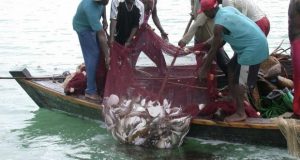 The youth, who showed interest, she stated, were going to be organized and supported with funds to go into that business.

She was speaking during a tour of some fish-farming sites on the Eastern Region part of the Volta Lake.

This was to assess the challenges faced by the farmers and how to tackle these to encourage and attract new investors.

Mrs. Quaye indicated that getting more young people into the venture could significantly raise fish production levels and earnings.

She underlined the determination of her ministry to make sure that the right things were done – best practices upheld.

It was on the basis of this that marine fishers had been made to observe “closed season” to allow for the increase of the fishes breed in the water, she said, adding that, it would soon be the turn of the canoe fisher folks.

The Minister applauded the fish farmers for the “great work they are doing, the passion and commitment”, which was giving jobs to the youth and women in the various communities along the lake.