He disclosed this to the press when the National Weightlifting team paid a courtesy call on him following their qualification to participate in the 2016 Olympic Games in Rio, Brazil for the first time. 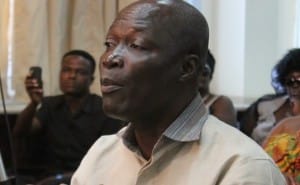 According to the Sports Minister, the weightlifting team will not be paid a qualification bonus, however, their participation at the Games will be taken care of and described the current practice where footballers are paid qualification bonuses as a bad precedent.

“I just want to say on record that the principle is; we do not pay bonuses on qualifications. When you qualify for the competitions, then we take care of it, but when you are attempting to qualify, we do not, and the truth of the matter is that a bad precedence has been set in the past with football and that we hope to change’’ he stated.

He said all the national teams must be treated the same and not a preferential treatment to only footballers.

‘‘We shall change it because if footballers play qualification matches for the Cup of Nations and they are paid winning bonus then athletes who also run to qualify for the Olympics must be paid bonuses’’.

So, if we are not doing that for the rest of the teams, then we should also take a look at what we are doing for football. All the sporting disciplines and all the athletes and the sportsmen and women and footballers are all Ghanaians” He added.

The Minister congratulated the weightlifting team on their qualification and urged them to train extra hard to to win medals at the global showpiece.

She said Twellium believes in supporting sports, “that’s why we decided to sponsor and we believe this platform will help you grow your brands and ours brands too”.