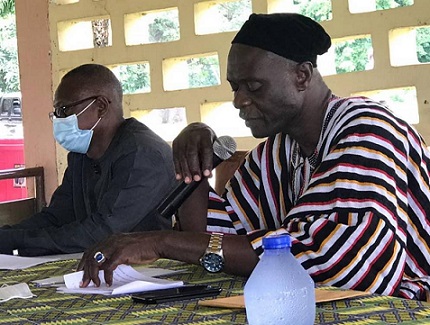 Alhaji Shani Alhassan Saibu, Northern Regional Minister is to hold a regional education review meeting for all stakeholders in the sector to brainstorm on how to reverse the poor academic performance amongst students in the region.

The regional education review meeting, which will be held later this year, forms part of the Regional Minister’s commitment to overcoming the fallen standards of education in the region and to build better future for generations as well as consolidate the gains made under the government’s Free Senior High School (SHS) intervention.

Alhaji Saibu announced this when he delivered his maiden address to the Northern Regional Coordinating Council (NRCC) during its meeting in Tamale.

The NRCC meeting was attended by Heads of Department and some Metropolitan, Municipal, and District Chief Executives as well as their Coordinating Directors in the region to take decisions expected to ensure the efficient and effective day-to-day administration and management of the region.

Alhaji Saibu said, “The performance of public schools in the region has also not been encouraging and measures must be put in place to address the fallen educational standards. In 2019, 15 schools scored less than 5% whilst one school scored 0% in WASSCE out of a total of 26 public schools. And in 2020, 15 schools again scored less than 5% out of a total of 27 schools.”

He said “Considering the poor trend of performance as indicated by the data, I hereby reiterate my commitment to ensure that as stakeholders, we take great interest to overcoming this menace to build a better future for future generations.”

He said, “It is worrying to see how our youth of today and most especially teenagers roam the streets both day and night aimlessly when they could have dedicated such times to their books or undergoing trainings that could serve as sources of livelihood to them in the near future.”

Alhaji Saibu spoke about road safety in the region expressing concerns about the use of tricycles for domestic and commercial purposes by minors, riding and driving without wearing safety gears, use of unlicensed vehicles and motorbikes and, without drivers’ licenses, which posed great threats to residents, as well as faulty street lights on major roads within the metropolis making the roads very dark at night and served as operating grounds for thieves and armed robbers.

He, therefore, announced that the authorities would soon start strict enforcement of road traffic regulations to arrest offenders as part of measures to ensure sanity on the roads in the region.

He touched on the COVID-19 pandemic and reminded residents to abide by the safety protocols, adding, “The country also received a supply of the Johnson & Johnson vaccines and I advise all those who missed the AstraZeneca to endeavour to utilise the opportunity presented the second time to get vaccinated.”

He also spoke about infrastructural development saying, “Work on the Tamale interchange is progressing steadily and efforts are being made to ensure timely completion to see to it that traffic flow within the metropolis returns to normalcy.

I, therefore, urge residence and road users to bear with the inconveniences caused by the project to ensure successful completion.”

He added that, “Also, a drive through the metropolis, one will notice the asphalting of some major roads as part of government’s move to sustain the good nature of roads within the metropolis.”