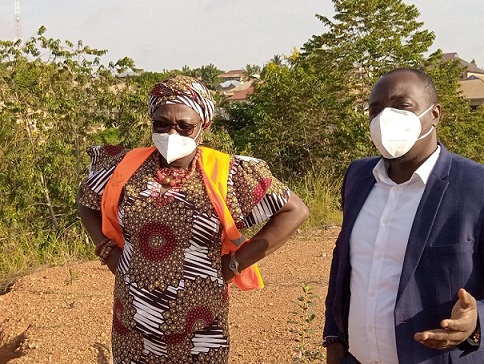 The abandonment of construction work on the 12.6-kilometre Outer Ring Road in the Sunyani Municipality has attracted the anger of Madam Justina Owusu-Banahene, the Bono Regional Minister.

Accordingly, she has directed the Regional Urban Roads Directorate to immediately arrange and meet the contractor for work to resume.

The Ghana News Agency (GNA) gathered that contract on the road project was awarded to Kofi Job Company Limited in 2015 at the cost of GHC31, 444,562, but the contractor had not been seen on site for years now.

During a visit Mad Owusu-Banahene expressed disgust at the deplorable condition of the road and asked the Urban Road to act swiftly before the unexpected happened.

She described the situation as unfortunate, and expressed the hope that the contractor would cooperate with relevant institutions for work to resume as soon as possible.

Because the road had no drainage systems, erosion has taken over both sides, and is gradually spreading around, a situation which threatened the lives of drivers, motorists, pedestrians and other road users.

Residents along the road expressed worry about the situation noting that because of the erosion, it was dangerous to ply the road at night and during rainy seasons.

Commenting on the matter, Engineer Jacob Nelson, the Bono Regional Director of Urban Roads told the GNA works on the project was expected to be completed within 18 months.

He said work done on the project was about 50 per cent, but added that efforts to contact or trace the contractor was unsuccessful.

“We have written several warning letters, but the contractor has failed to respond. From our observation it seems the contractor is not interested in continuing with the project and I think action must be taken to terminate the contract” he stated.

Meanwhile, works on the construction of the nine-kilometer Inner Ring Road in the Municipality was steadily progressing during visit to the project site.

Mad Owusu-Banahene expressed satisfaction about the progress and quality of work, and hoped contractors would complete the project as scheduled.

Being executed by the Sino-Hydro Corporation, the project is expected to be completed within 24 months.