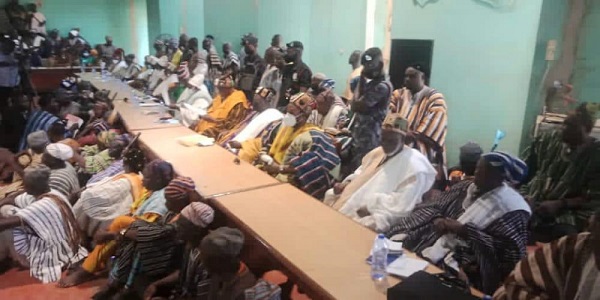 Mr Ebenezer Kojo Kum, Minister of Chieftaincy and Religious Affairs, has called on members of the Northern Region House of Chiefs to expedite actions to resolve any impending Chieftaincy issues in the Region.

He said it was incumbent on traditional authorities to ensure all Chieftaincy-related matters were resolved to bring peace and tranquility among the people.

He was speaking at the Northern Regional House of Chiefs’ general meeting, in Tamale.

Mr Kum said “there is the need to do things that will uphold the integrity of the Chieftaincy institution and, one of those are for you, as custodians of the land, to resolve any impending Chieftaincy disputes in the region”.

He noted that peace and stability were the only surest ways through which the region could be developed, and appealed to the Chiefs to settle all other matters brought before them amicably to realise this goal.

Ya-Na Abukari II, the Overlord of Dagbon, said he was committed to ensuring the Region remained peaceful to promote socio-economic development in the area.

Ya-Na Abukari II, who is also the President of the Northern Regional House of Chiefs, said he would constitute a committee to look into all disputes including, Chieftaincy and land issues, to guarantee harmony and unity among residents in the region.

Alhaji Alhassan Shani Saibu, Northern Regional Minister, called on traditional authorities to collaborate with members of the Northern Regional Security Council to identify hotspots of any possible conflicts in communities and resolve them to sustain the peace in the region.