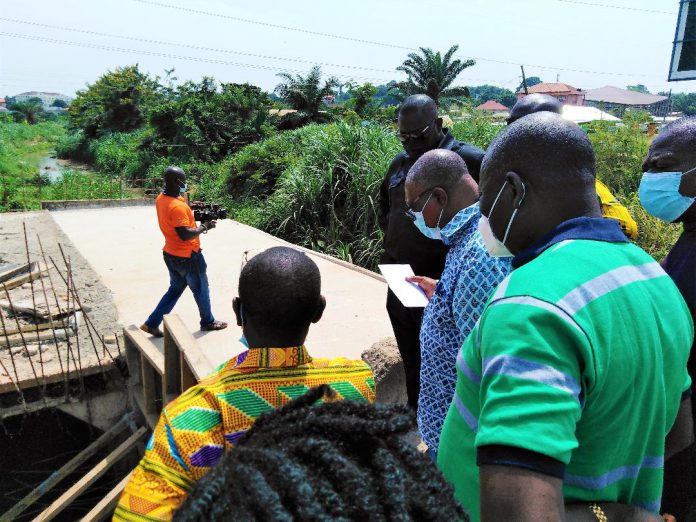 Metropolitan, Municipal and District Assemblies (MMDAs)have been directed to identify and demolish all illegal structures situated on waterways in their respective areas.

“The Ministry of Works and Housing is asking the Assemblies to pull down such structures constructed without permit since they impede the course of water bodies,” Mr. Francis Asenso-Boakye, the Minister, ordered.

They should also follow due process in the way building permits were issued to developers to help check such illegal practices, which had over the years contributed significantly to the recurrent flooding in the country, he added.

Mr Asenso-Boakye, in an interview with the media, after inspecting the drainage system in some parts of Kumasi, estimated that about 400 structures were illegally sited on waterways in the Ashanti Region.

“This trend must be nipped in the bud given the related negative consequences on the society,” the Minister observed.

The Ministry, he said, was worried over the impudence with which some developers had encroached environmental buffer zones, warning that any official caught to have compromised his or her duties would be dealt with.

Mr Asenso-Boakye was in the Region for a three-day working visit, and accompanied by officials of the National Disaster Management Organization (NADMO), as well as technical men and Heads of Departments and Agencies under the Ministry.

While in Kumasi, the Minister inspected the Asafo Market, South- Suntreso, Susanso and Atafoa drainage systems, which have a high deposit of solid waste, resulting in their blockage and recurrent flooding, especially in the rainy season.

At South-Suntreso, the delegation, including; the Metropolitan Chief Executive, Mr. Osei Assibey-Antwi, ordered the immediate eviction of a retail fuel dealer selling some of his products close to a stream.

Some gallons of fuel, belonging to the retailer, were also seized by officials of the NADMO and ordered to produce his business permit.

Mr Asenso-Boakye said the nation could not afford to destroy what nature had bequeathed the people, saying it was in the interest of all that the varied water resources were protected at all cost for posterity sake.

He said there were plans in place to open up the drainage systems in the Kumasi Metropolis to stem the perennial flooding in some of the areas.

Mr Assibey-Antwi advised the citizenry to demonstrate a high sense of discipline in the management of environmental-sanitation.