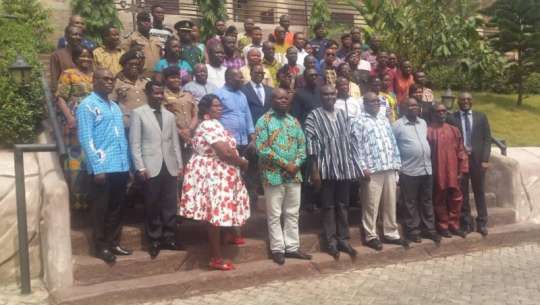 Participants at a two-day consultative workshop on the evaluation of the Economic Community of West African States (ECOWAS) vision 2020, in Ho have asked the Ministry of Foreign Affairs and Regional Integration to sensitise the citizenry on protocols of the Organisation.

They said that was the only way to make ECOWAS visible in the country and ensure effective regional Integration.
The participants said though ECOWAS had chalked some successes, more needed to be done to make it a Community of people and not states.

They were not happy that ECOWAS’ flag and anthem were not known to citizens of Member States and charged the Ministry to “preach ECOWAS to the citizenry.”

They lamented about border crossing challenges and lack of knowledge on the protocols and their advantages to the people, which narrative must change.

Dr Frank Offei, a former Executive Secretary for ECOWAS said it was time for Ghana to reshape the dreams of ECOWAS and champion the regional integration agenda.

He said Ghana must use its “moderate, reasonable and rational voice” to push for political, social and economic cohesion for the good of the regional body.

Mr Charles Owiredu, Deputy Minister for Foreign Affairs and Regional Integration said regional integration was essential for the socio-economic development of the West African sub-region and the continent as a whole.

He said the long-term vision of ECOWAS remained the creation of a borderless, peaceful prosperous and cohesive sub-region, established on the principles of democracy, good governance and the rule of law with the people taking advantage of resources for rapid growth.

Mr Owiredu said the consultative meeting would help create a people centred and people driven regional integration with citizens given greater voice and a more integral role in the Organization’s evolutionary process.

The meeting, which had support from the National Development Planning Commission (NDPC), attracted personnel from the security services, the media, civil society organisations, political parties, opinion leaders and heads of decentralised departments and agencies.

Similar events were held in the Northern, Ashanti and Western regions.