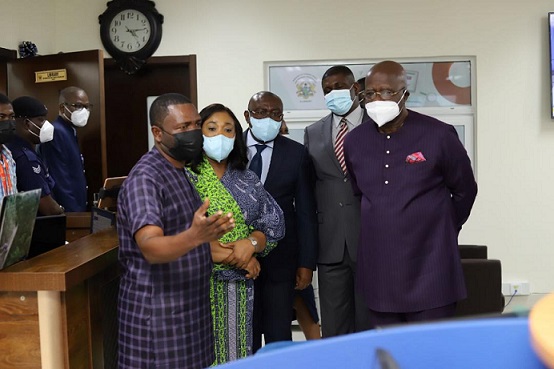 Madam Shirley Ayorkor Botchwey, the Representative of the President at the Ministry of Foreign Affairs and Regional Integration, has commissioned an E-Library and Language Laboratory in Accra.

The E-Library, which is located within the Foreign Ministry Building, has been named after Mr Hackman Owusu Agyeman, a former Foreign Minister.

The facility has a 23-computer set-up and extra seating for easy reading and large screen for video conferencing and 65-inch television and projector (linked by HDMI) for presentation and training.

Madam Ayorkor Botchwey said, she was happy that Ministry had the opportunity, at the start of the year, to add “this important learning resource for capacity building” to the facilities of the Ministry, adding that this was a Project that had been on the Ministry’s agenda for a number of years.

She said it was a tradition to name such facilities after illustrious statesmen and women, who had paid their dues to the development of the country.

“One such person is the former Minister for Foreign Affairs and Regional Integration, Mr Hackman Owusu Agyeman. It is therefore, fit and proper that this E-library is named after him,” she said.

She said the facility had also been equipped with a 10-inch tablet for screen mirroring and remote presentation, adding that it was being run on a Library Management System, which had security tags and registers the movement of all physical material.

“We have also taken the steps to ensure that it is connected and has subscription to leading library database quick reference and research,” she said.

Madam Ayorkor Botchwey said the supply and installation of the E-library was undertaken by RFID Gate at the cost of GHC 520,860.00 and funded from a grant obtained from the Chinese Government, which she said she was privileged to have facilitated during the first term of the Government of President Nana Addo Dankwa Akufo-Addo.

She said the E-Library would benefit staff of the Ministry and contribute to boosting overall productivity as well as enhance the capacity of officers to effectively carry out their duties so that they could continue to remain abreast of the rapidly changing developments in the world.

“With the widening scope of Ghana’s bilateral and multilateral engagements, the Ministry also recognizes the important role of language in facilitating relations between countries. The language laboratory will certainly give officers of the Ministry the unique opportunity to learn new languages,” she said.

She noted that already, the Ministry had been collaborating with the Embassy of Colombia in Accra to offer Spanish as a Foreign Language Course for Diplomats and other Public Servants, adding that the Eighth Edition of the course would commence soon.

She expressed the determination of the Ministry to ensure that the facility was properly managed and maintained.

Madam Ayorkor Botchwey noted that in this regard, the Ministry had requested the Ghana Library Authority to second an officer to manage the facility.

She urged officers of the Ministry to adhere to guidelines for the use of the E-Library.

Mr Owusu Agyeman expressed gratitude to the Madam Ayorkor Botchwey and the Ministry of Foreign Affairs for the honour done him.