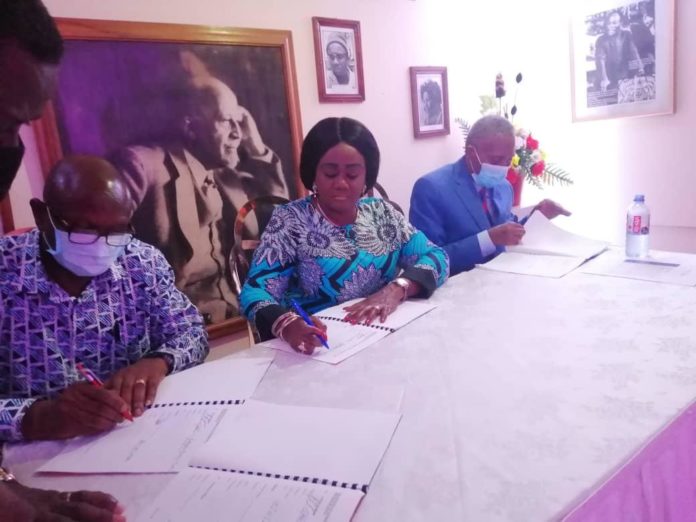 The Government, through the Ministry of Tourism Arts and Culture, has signed a Memorandum of Understanding (MOU) with the W.E.B Du Bois Museum Foundation to develop, rebrand, operate and manage the Du Bois Centre to preserve its legacy.

The partnership is aimed at transforming the Memorial Centre into a Museum Complex that would honour and help preserve the Pan-African culture, legacy of W.E.B Du Bois.

Mrs Barbara Oteng-Gyasi, the Minister of Tourism, Arts and Culture, said government was taking an important step towards honouring the memory of an icon of the global Pan-African Movement, William Edward Burghart Du Bois, and his wife, Shirley Graham, for their leading and pioneering roles in the African emancipation movement.

She said the initiative was also to build Ghana’s image as the home of Pan-Africanism, in line with the social, cultural, economic and political emancipation, as well as the integration of people of African descent.

Mrs Oteng-Gyasi said the Museum Complex would add impetus to government’s projects and programmes to bridge the gap between Africans in the diaspora with those in the homeland.

“Since last year some key initiatives towards this sacred cause of integration include the recently successful ‘Year of Return’ and its follow up ‘Beyond the Return’ project, all aimed at encouraging the return to Africa by Africans in the diaspora,” she said.

“Also is the initiation of the Homeland Return Bill, which when passed into law, will grant special recognition and a speedy pathway to people of African descent who wish to obtain Ghanaian citizenship and the right of abode in Ghana, demonstrating the commitment of Ghana to our brothers and sisters of African descent.”

Mrs Oteng-Gyasi said once the Museum Complex was complete, the Foundation would have full responsibility of its management and an international board of directors would be sworn-in to supervise management of the complex.

He said the MOU would enable the two entities to delve more into the ownership and relationship structures of the Centre to better understand its complexities so as to plan for the proper execution of development goals.

“We believe we have the capacity and the capabilities to launch a global awareness campaign to raise the resources we will need to build a first class Museum Complex honouring the legacy and ideals of the great Du Bois.”

Mr Aryiku said they would hold consultative meetings with parties in Ghana and the Diaspora and at appointed time unveil Adjaye Associates design for the Museum Complex.