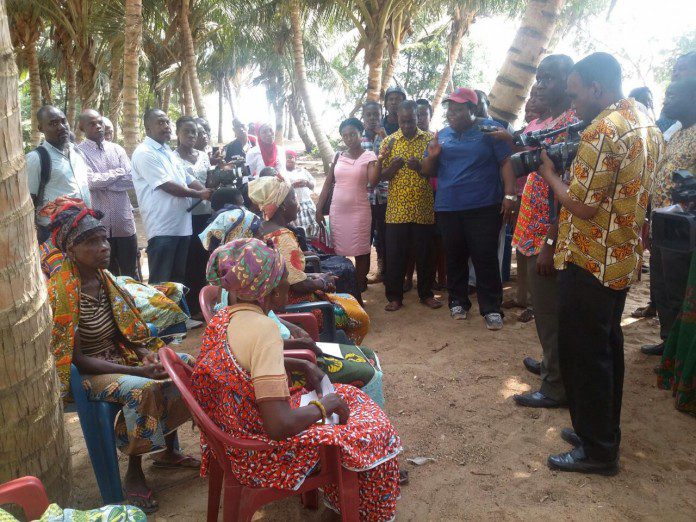 It will also operationalize the National Target Unit to undertake data collection exercise in Upper East and Northern regions and develop a Ghana National Household Registry at the regions.

The Ministry has already provided bi-monthly cash grants to a total of 116,000 households in 180 Districts in 10 Regions under the Livelihood Empowerment Against Poverty (LEAP) Programme.

To ensure timely and efficient transfer of cash to beneficiaries, 9,658 households in nine districts in seven regions received electronic payments of the LEAP Grants in three piloted ecological zones.

Mr Seth Terkper, Minister for Finance and Economic Planning who disclosed this at the presentation of the 2016 Budget Statement and Economic Policy in Parliament on Friday, said under the LEAP 1000 project, enrolment of additional 6,006 beneficiary households was completed in seven and three districts in the Northern and Upper East regions, respectively.

He said following the June 3rd flood and fire disaster, the Ministry set up an emergency LEAP intervention programme for the victims and an amount of GH¢3.9 million was disbursed to support 10,274 households affected by the disaster.

The Ministry in partnership with Direct Aid Africa also donated relief items to 1,000 victims of floods in Keta, Osu and Kumasi.

He said the Ministry facilitated effective targeting for all social intervention programmes in Ghana, and established the National Targeting Unit to develop the Ghana National Household Registry (GNHR) database and Management Information System (MIS). Consultations are on-going in the Upper West region to develop the regional register.

“A five year Strategic plan was developed to facilitate the upgrading and affiliation of the School of Social Work to the University of Development Studies.

“A total of 1,925 elderly persons were registered in Ashanti (Asawase), Eastern (Akropong) and Volta (Ho, Keta) regions as part of the NHIS biometric registration exercise initiated in 2014.

The Ministry also launched the celebration of 40 years of the Women‟s National Machinery in Ghana and hosted a national gender dialogue under the theme “40 Years of Ghana‟sWomen‟s Machinery; Achievements, Challenges and the Prospects”.

“It also participated in the 59th session of the Commission on the Status of Women and presented the key achievements of Ghana, 20 years after the adoption of the Beijing Declaration and Platform for Action.

“A seminar to commemorate the International Women‟s Day was also organised at Hohoe under the theme “Breaking barriers towards gender equality and women‟s empowerment; picture it” and a platform was provided for Junior High School (JHS) students to debate on the theme,” he added.

He said to address gender equality, equity and empowerment of women and girls, the National Gender Policy was approved by Cabinet.

“The Ministry in 2016 will review the Ghana National Plan of Action (GHANAP) on the UN Resolution 1325 on Women in Peace and Security and sensitize stakeholders including traditional authorities, women groups, youth, educational institutions, media etc. on the pillars of GHANAP 1325. It will initiate gender dialogue sessions on the role of women in ensuring peaceful elections,” he announced.

On Child Rights Promotion, Protection and Development Programme, he noted that to promote the interest of children, the Child and Family Welfare Policy was launched and will be implemented in 2016.

He said the Ministry conducted national, regional and community consultations including a high level meeting with stakeholders on the Justice for Children Policy. About 4,000 persons were consulted. The Policy is being finalized for Cabinet‟s consideration.

“The Ministry provided shelter, care, counselling and education for 648 orphans and vulnerable children and trained 70 managers of Residential Homes for children, in best practices for effective management of the children homes.

“Ghana‟s 3rd, 4th and 5th Consolidated Reports on the implementation of the Convention on the Rights of the Child which highlight strides made in addressing concerns of children in Ghana were submitted to the UN Committee in Geneva.

“The African Union (AU) Day of the African Child was celebrated nationwide with the national commemoration held in Accra and Bonakye in Nkwanta District in the Volta Region under the theme: “Ending Child Marriage in Ghana through strengthening of family and community structures,” he said.

Mr Terkper said the Gender Ministry drafted the Adoption and Foster Care Regulations and also established the Central Adoption Authority. In 2016, the process for the Amendment of the Children‟s Act, 1998 (Act 560) will be initiated and communities sensitized on the rights of children.

The Ministry prepared and submitted 554 Social Enquiry Reports to the Family Tribunals and Juvenal Courts for the determination of adoption and custody casesunder its Social Development/Protection Programme.

. “To address the concerns in respect of protection of victims, the Human Trafficking Legislative Instrument was submitted to Parliament. The Ministry also signed a Child Protection Compact Partnership Agreement with the US State Department to support Ghana to fight Child Trafficking in Greater Accra, Volta and Central Regions and proposals for implementation are being evaluated.

“The Domestic Violence Legislative Instrument was finalized and a national campaign to “End Early Marriage” was launched. In 2016, the LI will be submitted to Parliament for consideration. A new Human Trafficking National Plan of Action was also initiated

Inclusion of Persons with Disability Programme

“The Ministry in collaboration with the Ghana Standards Authority developed a draft Ghana Accessibility Standards in built environment with the objective of making the environment disability friendly,” he added.

He said in line with the UN Convention on the Rights of PWDs, the Ministry developed a proposal for the amendment of the Persons with Disability Act (Act 715) 2006. A draft Affirmative Action Plan on representation of PWDs in the district assemblies was also submitted to the Office of the President for consideration.

On School Feeding Programme, he said, the Ministry submitted a national school feeding policy to Cabinet for consideration.

The programme is currently providing one hot and adequately nutritious meal to 1,693,698 pupils in 4,881 schools per each school day and provides ready market to farmers and jobs to about 20,000 caterers and cooks nationwide.

“In 2016, the school feeding programme will be expanded to cover 3,000,000 pupils nationwide. To facilitate transparency and accountability in the management of funds, a comprehensive, financial and performance audit will be conducted in addition to the institution of an electronic payment system to contractors.