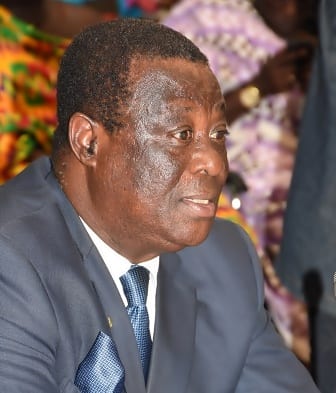 The Ministry of Roads and Highways is to cause the demolition of buildings on the Akwapim Rigde in the Eastern Region, which are contributing to the falling of rocks unto the Peduase-Ayi-Mensah- Aburi Highway.

Mr Kwasi Amoako-Atta, the Sector Minister said, the action would help to save the lives of the motorists and pedestrians who use the major highway – connecting the Greater Accra to the Eastern Region.

Following some slope failures and rock falls on that section of the road after a downpour, the Ghana Highway Authority (GHA) on Sunday, October 27, announced an emergency closure of the Accra-bound carriageway from the Peduase Lodge to Ayi Mensah on the Accra-Aburi road to vehicular traffic.

This was informed by a technical advice that the situation could recur and threaten safety on the road.

Speaking to journalists, who joined his technical team to assess the situation for redress, Mr Amoako-Atta said human activities especially, the construction on the ridge was a major contributory factor because they were affecting the arrangement and integrity of the sedimentary rock.

He, therefore, urged the relevant local authorities in area to stop issuing building permits to developers on the mountainous areas.

The Minister explained those activities had left deep cracks in the rocks, thus serving as outlets for water to seep whenever there was a downpour, which tended to weaken the structures.

Developers on the Ridge who did not have permits, therefore, had to be punished, the Minister said.

“We are in a country where indiscipline abounds. Recalcitrant developers should have their buildings demolished. Human life is more precious than the buildings we see”.

The Ministries of Roads and Highways would liaise with its Local Government and Rural Development counterpart to draw the attention of assemblies on the dangers of issuing permits for such projects.

During the tour, the team realised that there were ongoing construction projects on the Peduase stretch with the deployment of some heavy equipment and vehicles.

The Minister tasked the GHA to clear the debris on the closed road within one week for work to resume on the Peduase- Aburi Stretch.

In another visit to find out the cause of the recent flooding of Tema Motorway, the Minister learned that it was the result of the blockage of the five cells constructed to carry water on the motorway by plastic and other waste materials.

Mr Wise Ametefe, the Registrar of the Engineering Council, who briefed the Minister, therefore, suggested the de-silting of the cells to curb a recurrence on the nation’s premier motorway.

Mr Amoako-Atta cautioned citizens to stop the poor practices of waste disposal, especially the dropping of plastics in the cells.

He also visited the ‘Ashaiman Under-bridge’, where he announced that as part of the Tema Motorway Roundabout Project, it would soon be given facelift.

The Minister also inspected the 7.2 kilometre Teshie-LEKMA road and urged the project manager to expedite work.

Members of Parliamentary Select Committee on Roads, officials of the GHA, Urban and Feeder Roads, were part of the team.