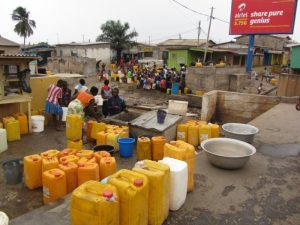 The Minority in Parliament has called on government to address the acute water shortage in parts of Accra and its environs likely to exacerbate the fight against the COVID-19 pandemic.

According to the Caucus, Accra, being the epicenter of the Coronavirus cases in Ghana over the past week, had suffered a nauseating water shortage which is really biting hard on the people.

Some of the affected areas include; Adenta, Madina, La, Achimota, Ashaiman, Tema, Kasoa among others.

Mr Emmanuel Kwasi Bedzrah, Ranking Member on Works and Housing Committee, speaking to the Media in Parliament said government’s promise to provide free water to residents in the Greater Accra Region and ensure water tanker delivery service to areas with no pipelines was defied.

The current water shortage in Accra and its environs has come at a time President Nana Akufo-Addo announced to the nation, that as part of mitigating measures against the COVID-19 pandemic, a three-month-April, May, June- period of free water supply to households would be free.

The free water to citizens as announced by the President was not limited to fixed pipes, but also included; Mobile Water Tank delivery to homes where there were no water supplies through public main pipes.

Mr Bedzrah also maintained that the water challenges in Accra were not only rendering the country’s fight against the pandemic ridiculous, but fruitless.

He said most Ghanaians especially residents in and around Accra were excited when the President announced the measures during his nationwide broadcast on Sunday 5th April 2020.

He stated that the Minister for Sanitation and Water Resources later corroborated the President’s announcement by providing details of the directives to the public.

“As we may all be aware, one of the preventive measures/protocols for COVID-19 is regular washing of hands with soap under running water.

Unfortunately, under the current circumstances, residents in Accra are confronted with an acute water shortage and one wonders how practicable it would be for them to wash their hands under non-existent running water, let alone use same for domestic and industrial purposes,” he added.

Mr Bedzrah indicated that the President’s announcement of a programme such as free water to households may earn him a loud applause, and may be useful for propaganda purposes, but the problem with such pronouncements, which were biting hard now was the Government’s readiness and capacity to deliver on these flamboyant announcements.