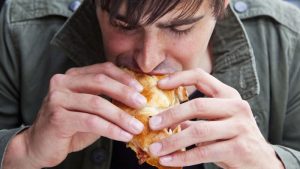 Big bite. Young man eating People who cannot bear sounds such as chewing or breathing may have a brain abnormality, researchers say.

Misophonia is a condition where a person reacts extremely negatively to certain sounds that most people take little or no notice of, such as a pen clicking or someone eating.

When exposed to the noises – or “trigger sounds” – sufferers can respond with an intense “fight or flight” reaction.

Scientists at Newcastle University found a difference in the frontal lobe of the brains of misophonia sufferers, suggesting the condition is genuine, contrary to some previous scepticism.

Trigger sounds prompted changes in brain activity that caused a sufferer’s brain to go into overdrive. They also found that misophonia sufferers sweated and experienced an increased heart rate when they heard the offending sounds, according to an article in the journal Current Biology.

Dr Sukhbinder Kumar, from the Institute of Neuroscience at Newcastle University, said: “This study demonstrates the critical brain changes as further evidence to convince a sceptical medical community that this is a genuine disorder.”

Tim Griffiths, professor of cognitive neurology at Newcastle University and UCL, said he hoped the study would “reassure” sufferers.

“I was part of the sceptical community myself until we saw patients in the clinic and understood how strikingly similar the features are,” he said.

One of those sufferers is Olana Tansley-Hancock, a 29-year-old from Ashford in Kent.

She said she had started eating meals in her bedroom when she was eight because of the noises her family made while eating.

She described misophonia as “a feeling of wanting to punch people in the face when I heard the noise of them eating – and anyone who knows me will say that doesn’t sound like me”.

She said: “This research is a huge relief as it shows there is a physical basis for misophonia which should help others understand the condition.

“It also opens up the opportunity for better management.”

Jupitar explains his equality in the music industry comment

NHIS Would Collapse if Cash for Drugs System Continues