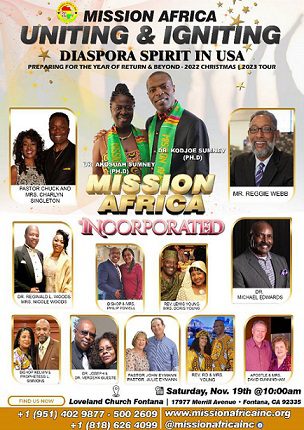 All is set for the much anticipated “Uniting & Igniting for Economic Development Conference which is slated to take place on November. 19, 2022 at Loveland Church, 17977 Merril Avenue, in Fontana CA 92335.

The “Uniting & Igniting for Economic Development Conference” which is the first of its kind is been organised by Mission Africa Incorporated in collaboration with the Inland Empire Concerned African American Churches (IECAAC).

The theme for the conference is: “Ten Times Better Generation” which seeks to focus on bridging the gap between the next generation of Africa and the Africa Americans and descendants of Africa worldwide in America is expected to attract over 5,000 youth and 1000 business people across Pacific Island, Africa to American.

Again, Ambassadors from various countries in America and some delegates including members from the Ghanaian Parliament and Ghana’s Parliamentary Christian Fellowship are among hundreds of people who will be in attendance.

Speaking in an interview with the media, the founder and president of Mission Africa Incorporated, Dr. Kodjoe Sumney explained that the rationale behind the “Uniting & Igniting for Economic Development Conference is to encourage and to wake up the spirit of unity and igniting missions in the Inland Empire in San Bernardino County in California.

According to Dr. Sumney, he and his Co-founder wife, Dr. Akosuah Sumney in the last twenty years have taken over one thousand people mainly African-Americans, Caucasian-Americans, Indians, and Mexican-Americans for missionary work and the African Union parliament prayer conference in Ghana.

“Our friends and partners join us to empower youth in the universities mission work in the remote villages. Given various humanitarian assistance and tourism.

But for the last two and half years, Mission Africa Incorporated has been operating through viral due to the emergence of the Corona Virus (COVID-19) pandemic.” He noted.

We are going to focus more on uniting diaspora Africans worldwide for economic empowerment in skills and entrepreneurship where they live and return home to assist in developing our continent through the private sector. The founder and President of Mission Africa Incorporated reiterated.

Dr. Sumney said “we are entering another ten years phase of Africa rising. The current challenges facing the continent is a time of reawakening for the youth and the next generation to join the crusade for a rebirth of the continent”.

He continued by saying this is the time for Africans to have leaders who are spirit-filled, and willing to sacrifice for the total development of the continent, like Nehemia in the Bible and leaders who did not receive allowances for twelve years to rebuild the wall of Jerusalem.

Africa, Dr. Sumney reiterated needs servant leaders who are full of wisdom, visionary leaders with seven eyes ( Zechariah 3:9), and successful in entrepreneurship together with our renowned business people, wisdom kings/ Queens to be in governance. Thus Africa Democracy- SANKOFA.

3. Invasion for Slavery- (The truth will set you Free).

4. The Faith of our Fathers in God before Christianity / Islam, 5. Kingdomnomics for kingdom Prosperity.

7. Africa in the State of Emergency

8. Unite now or We Perish

11. Everywhere in Africa is Your Home,

Some of the sub-themes to be treated during the conference will include the following: How to fill the empty churches and auditoriums after covid19, the year of Return and beyond to Ghana, Mission Africa Progress report of 2000-2022, investing in Ghana- Africa through Chamber of Commerce, Name changing ceremonies, School exchanging programs, Business partnership forum and Import and Export.

He is therefore calling on all Africans in America, business owners, and churches in California to come and be refreshed and empowered. Saying the way forward for Africa is through uniting and igniting for economic development wherever we are and preparing our next generation to give us the African we need before agenda 2063.