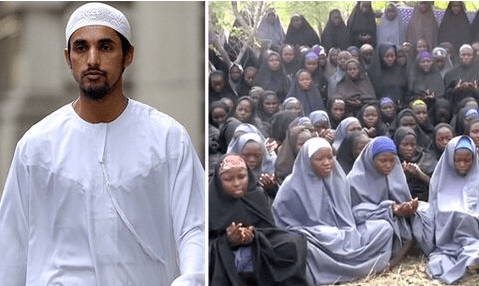 UK-based Islamic hate preacher was being investigated by the police starting from May 29, 2014, for sharing a video in which he praised Boko Haram terrorists for abduction of over 200 girls form GGSS Chibok in Borno State.

In his video message, the 31-year-old resident of London, Mizanur Rahman, claimed that violence against infidels (non-Muslims) was ?not necessarily a bad thing?.

?People want to make it out as though history began on the day these girls were taken from ? sorry I should say these women ? were taken from this high school in Nigeria.

?They [Boko Haram] didn?t do to these girls what the Nigerian government had been doing to the Muslims all these years. They didn?t r*pe anybody. They didn?t torture. They didn?t murder any of these girls,? Daily Mail UK quoted the preacher as saying in the video.

It was not the first time Rahman expressed support to Boko Haram sect. In one of his previous interviews to the London Evening Standard he declared:

?On the one hand people are portraying them [Boko Haram] as crazed lunatics who don?t know anything about Islam or society in general.

?But on the other hand if you actually read their messages they are not trying to destroy society, they are just complaining about the oppression against them and trying to better society.?

The preacher, who attracted the attention of the police, used to be a follower of another suspected religious bigot, Anjem Choudary.

Barber jailed over abduction and defilement