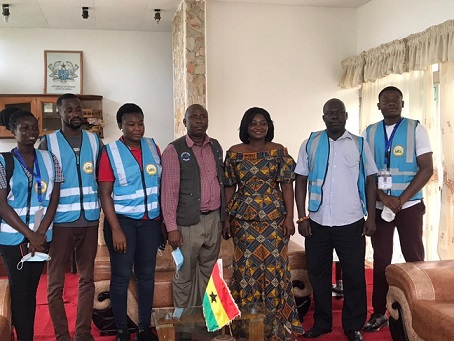 Mrs Justina Marigold Assan, the Central Regional Minister, has charged the Metropolitan, Municipal, District Chief Executives (MMDCE’s) to assist officers of the ongoing Population and Housing Census to ensure everyone got counted.

That, she said, the MMDCEs should make all available resources, gadgets and equipment ready to support the census team for the exercise to go on smoothly for them to be able to receive funds and other projects to develop their respective communities through proper planning and budgeting.

Mrs Assan made the call on Monday, in an interview with the Ghana News Agency (GNA), after a delegation from the Census office took her through the enumeration process to get herself and her household counted.

She explained that the exercise was of great importance for the development of the communities and the nation, adding that the data would help in development planning and equitable distribution of resources.

Mrs Assan said the exercise would also help in understanding the demography of the population and will attract numerous economic and social benefits as well.

“I, therefore, crave the indulgence of all households to fully comply and cooperate with the census officials as they embark on this all-important national exercise,” she appealed.

The Regional Minister indicated that it was important for all to avail themselves be counted to have accurate and consistent data to guide the government and policy makers to meet the needs of the population.

“If we do not get comprehensive data of the citizenry, then obviously it will be difficult planning, to address myriad of challenges confronting the country,” she added.

She told the public to desist from politicizing the national agenda, adding that all and sundry should partake in the exercise as it was their civic responsibility as citizens of the country.

Mr Isaac Addai, the Regional Statistician, noted that it would be of interest for all citizens and non-citizens to assist the government to distribute the nation’s resources equitably and fairly.

He cautioned the public to desist from physical and verbal attacks on field officers because such acts could defeat the purpose of the exercise.

More than 4,400 enumerators, supervisors and officers have been deployed across the region to partake in the exercise.