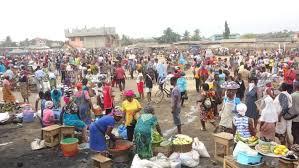 Metropolitan, Municipal and District Chief Executives (MMDCEs)in the Central Region have been tasked to effectively collaborate with the security agencies to enforce social distancing at markets and coastal communities.

Mr Kwamena Duncan, Central Regional Minister who made the call noted with regret that almost all markets and fishing communities in the region were not complying with the social distancing protocols despite several appeals to them to observe it.

Mr Duncan was speaking at a Regional Coordinating Council meeting with the MMDCEs, Head of the security agencies, Ghana Health Service and other Departmental Heads.

The meeting was among other things to marshal out effective strategies for the successful implementation of the Government’s free water for all policy and compliance of the public health strategies such as social distancing put forward by health experts to contain the spread of the COVID-19 pandemic.

Social distancing was identified as one of the best public health strategy for controlling the spread of the COVID-19 disease in the country.

The Regional Minister encouraged the MMDCEs to come up with action plans and work closely with the Police to achieve the desired result.

“Every step we are taking is in the interest of the people. Go out and implement this. Get the support of the Police and make sure social distancing is enforced to the later”, Mr Duncan stated.

The Region boasts of some of the largest and notable markets in the country including; the Mankessim, Kotokuraba, Twifo Praso, Assin Fosu, Swedru and Kasoa markets among others, which had market days where traders come from all parts of the country to trade.

Mr Duncan admonished MMDCEs to ensure that every household in their respective assemblies had access to free potable water as directed by the President without any discrimination.

He expressed regret about agitations over the decision to use some senior high schools as isolation centres saying, every step being taken was in the interest of the larger population.

Such behaviors, he said only went to undermine the efforts and gains made in the COVID-19 fight and called on the media to be sensitive in their reportage to avoid further agitations and resistance from the people.

Giving situational report of the COVID-19 in the Region, Dr Akosua Owusu-Sarpong, Regional Director of the GHS said the Region had since received 273 suspected cases of which 155 had come out negative with only one confirmed case.
She added that a person resident in Accra, confirmed positive brought it to the Region and was managed at a health facility there.

She said 84 fishermen were put under mandatory quarantine, on their return from a fishing expedition in neighbouring African countries.

Some of the MMDCEs shared their plans for the enforcement of the social distancing protocols with some suggesting a shift system for the traders while other threatened to totally close down markets that did not comply with the directives.

They assured the Regional Minister of their commitment and held series of consultations with the market queens for the successful enforcement of the social distancing protocols.