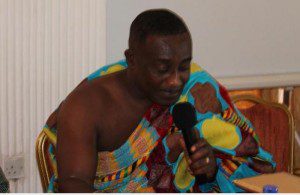 The Board Chairman of the Metro Mass Transit Limited (MMTL), Osabarima Ansah Sasraku III, has dismissed allegations leveled against him by the workers of the company.
The workers on Monday declared a nationwide strike to demand the dismissal of the Board Chairman and Deputy Managing Director over the disappearance of some 12 buses. Speaking to Citi Business News Board Chairman of the Metro Mass Transit Limited (MMTL), Osabarima Ansah Sasraku III alleged that there were some individuals behind the demonstration of the workers.

?How can workers one day just get up and go on strike on an issue that they the leadership are part of the committee that have investigated the issue and come up with the findings that no single metro mass serviceable bus is missing but then go on air, go on strike that their busses are missing and so they are asking that some individuals should be held responsible.?

Osabarima Ansah Sasraku III questioned if in Ghana here that is how strikes are declared, he asked how can the board give directive that if any metro mass bus was not missing a statement should be issued to the Ghanaian public to educate them but some individuals decided they would choose not to do that so that some orchestrated action can be taken and many more.

?So yes that strike action that happened did not just happen, there are people who instigated it but then you know what they have light a fire and lets see how they would quench, so we wait to see. The kind of indiscipline that they have introduced into the company, we are all watching and we are waiting to see how they will quench.?
Board Chairman of the Metro Mass Transit Limited (MMTL), Osabarima Ansah Sasraku III
Meanwhile, two days after staff of Metro Mass Transit demonstrated over the twelve missing buses at their terminals, the workers again demonstrated today saying they feel insulted, after the Deputy Managing Director John Awuku Dzuazah who they want sacked from the company was bought a new Toyota Prado. Divisional Union Chairman of the Junior staff Joseph Kesse Ahenkrah says they demanded that the new vehicle be brought to the yard of MMT immediately.

?Immediately after the minister came in to intervene and put a stop to the strike action we found out that a brand new Toyota Prado has been presented to the man that we are complaining about. It seems in our mind that what we did about three days ago does not sound good in the ears of our leaders. As we speak now you can go back to his house you see that the brand new car is there.?

The Chairman of the Junior Staff Union told journalist that they had approached their MD and asked why they did that and he said he knew nothing about that which prompted their second demonstration this morning. They prevented the Deputy Managing Director from working in his office by locking it up and told him to go back until the minister?s report come out. It took the intervention of the Police to claim things bring the situation to normalcy. Joseph Kesse Ahenkrah told Citi Business News something must be done immediately.

?Why is it that the minister came to stop us and a brand new car was presented to him? We want the car back to the MMT yard. Our next line of action is we are waiting for the minister?s report. If the report favors our demands, then MMT is going to be cool. Other than that until they hear from us that this man has taken our buses, we are going to prove to them that what we are saying is true.?

But the board chairman of the MMT Board Chair, Osabarima Ansah Sasraku III who express shock at about the renewed domostration says the board approved for the Toyota Prado to be bought after his previous car got involved in an accident.
?Somewhere in September, management made a presentation to the board that the deputy MD?s vehicle had a near fatal accident in February which he nearly lost his life and the vehicle was totally written off. They followed through the insurance and the insurers paid some money to the company. But because of the change in the dollar Cedi ratio, the amount given could not replace the vehicle (V8). So management was asking the board to approve some top up for them to get him a Prado and the board approved.?

Osabarima Ansah Sasraku III said it was the Deputy MD?s official Vehicle that was involved in the accident that was replaced as was requested by the Management of the company asking the workers not to demonstrate again because no one had decided to get the Deputy MD a new vehicle.