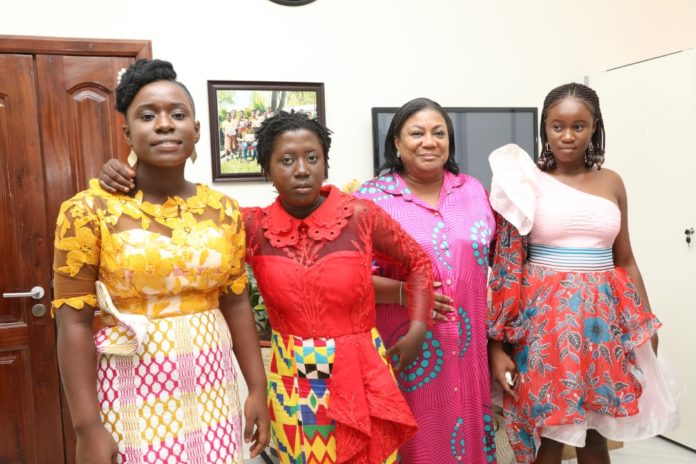 Three beautiful Ghanaian models Nana Yaa, Yacoba and Maame B, all living with autism, have paid a courtesy call on Ghana’s first lady Her Excellency Rebecca Akufo Addo at her office.

These beautiful models were trained by the founder of Afi Antonio Foundation.

Information gathered indicates that the group, including the parents of the models, led by Mrs. Afi Antonio-Addo was warmly welcomed by the first lady as she got firsthand information on children living with autism in Ghana.

Afi used the opportunity to explain the work and impact of the Foundation and invited the first lady to the Pan African Congress on Autism (PACA) as well as the 2nd edition of Autism Talent Show which would both be held in April 2020.

The parents of the girls also explained the state of their daughters and how it is like to go through the days with people who have such medical condition.

In support of autism awareness, Ghana’s first lady expressed interest in deploying national service personnel to serve at autism centres across the country, and thereby alleviate part of the cost of running them.

Speaking on the theme, Founder of the foundation, Mrs. Afi Antonio-Addo indicated that ” 1 in 87 children under the age of 3 years are affected by autism.

Autism is also known to be four times more prevalent in boys than in girls and about 50% of persons with autism exhibit elopement and wandering away from home, schools and other secured areas and go to environments where there could be at risk of potential dangers. “

The Afi Antonio Foundation is a non-profit organization focused on education and health of children.

The foundation is currently soliciting for partnership and funds from individuals and corporates bodies to help in its 2020 projects.

Austism is a lifelong developmental disability that affects how a person communicates with,and relates to other people.It also affects how they make sense of the world around them.