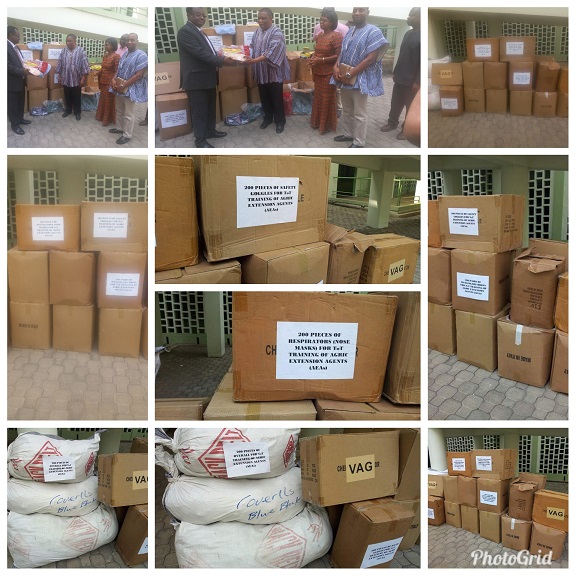 Mr. Abebe Haile Gabriel, FAO representative to Ghana has on Wednesday 10th January, 2018, made a presentation of Personal Protective Equipments (PPEs) to MoFA, on behalf of the FAO for the Training of Trainers (ToT) of Agricultural Extension Agents (AEA) to fight FAW invasion in the country.

 The presentation forms part of efforts by the Food and Agriculture Organisation (FAO) to support MoFA in the fight against fall armyworm.

According Mr. Mbebe Gabriel, there are plans underway to make available 2,000 pheromone traps and 4,000 lures for installation on crop farm for early detection of the Fall armyworms.

He elaborated the Pheromone is a chemical substance produced and released into the environment by an animal, especially a mammal or an insect, affecting the behaviour or physiology of others of its species.

The equipment includes boxes of two hundred (200) pieces each of Respirators, Overall farm clothing, Goggles, Wellington Boots and others.

Mr. Mbebe Gabriel However assured that, his outfit is ever committed to support government’s aim to achieve larger numbers of smallholder farmers at the grassroot levels to enhance their capacity for the adoption of management measures, that would reduce Fall army worm invasion in the country.

He however, lauded government for facilitating solid pragmatic steps to contain the invasive pest and armyworm and for that matter, the collaboration between FAO and the government of Ghana would continue.

“FAO will continue to support the efforts of the ministry to strengthen the overall monitoring and early warning mechanisms,” Mr. Mbebe reiterated.

The Minister of State in Charge of Agric at MoFA, Dr. Nurah Gyiele on his part appreciated the FAO for their support and assured of MoFA’s stern dedication towards the complete eradication of the FAW Canker in the country.

Dr. Gyiele reiterated that, the fight against fall armyworm would be a continuous task in order to prevent it from migrating to neighbouring countries.

“We are ready to go to war against the armyworm, our battalions will move to wherever army worm is reported. We hope they don’t come but when they do, we are prepared,” Dr. Nurah indicated.

Meanwhile, he assured all peasant farmers across the country, there would be more support from the FAO to annihilate the armyworm in the country.

Farmers will be provided with adequate subsidized fertilizer – Akufo-Addo