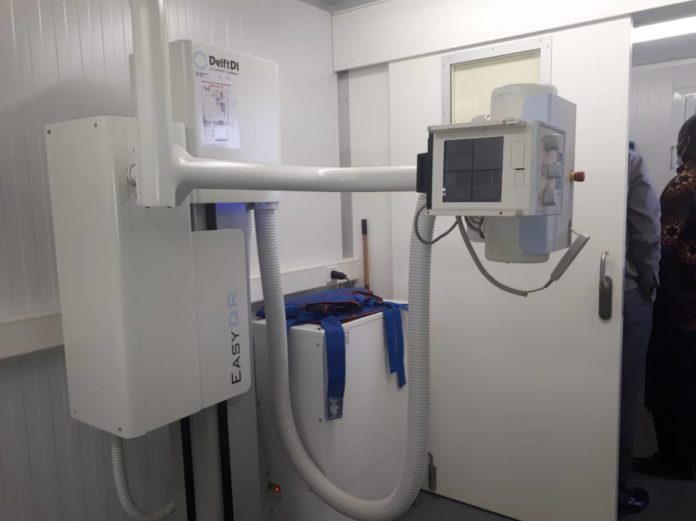 The software will help in the detection of COVID-19 on Chest X-rays. It was handed over with two Mobile Screening Vans known as the “Lung”, which contained fully furnished digital X-ray machines on, which the AI Software has been uploaded in a special device in a box.

The equipment is being operated by the National Tuberculosis (TB) Programme (NTP) to serve communities across 12 regions of the country.

Mr Ronald Strikker, the Ambassador of the Royal Kingdom of the Netherlands to Ghana, at the handing over ceremony at the Ga West Municipal Hospital at Amasaman in Accra, said the entire facility was estimated at 122,000 Euros, (approximately 750,000 Ghana Cedis).

He said the software technology, was developed by Universal Delft, aDutch Company, with funding from The Netherlands Enterprise Agency, to guide clinicians in using X-ray images in diagnoses.

Mr Strikker explained that the CAD4COVID was the first “AI” software that was confirmed to perform at the same level as human expert readers to detect COVID-19-related abnormalities on chest X-ray images, and that it was currently being used in over 28 countries across Europe, Asia, Africa and South America, and urged clinicians to explore it and other new technologies to ensure quality health outcomes.

He said the software had already been installed in 51 health facilities across the country, and had been successfully operating for almost two months to detect Tuberculosis and other lung diseases.

Mr Strikker commended Universal Delft for the initiative, and also Ghana, for the successful handling of the COVID-19 pandemic, eliminating the initial anxiety among the international community within the country, but said the deaths recorded were, however, unfortunate.

He, therefore, urged the Government of Ghana to remain vigilant and guard against a possible second wave of COVID-19 outbreak, as was the case in Europe and other countries globally, and encouraged the citizenry to continue to observe all the protocols to prevent the spread of infections.

Mr Strikker also acknowledged the economic impact that the COVID-19 pandemic had caused to countries globally, and expressed the hope that both countries would continue to shoulder each other in dealing with the challenges.

Dr Patrick Kuma-Aboagye, the Director-General of the Ghana Health Service, acknowledged the strong relationship that existed between the two countries for years, saying the introduction of CAD4COVID was timely.

said the main project, “Accelerating TB Case Detection”, which was run between 2016 and 2018, was funded by Governments of both countries, in support of early detection of Tuberculosis in Ghana, and that it was now in its operation and maintenance phase, and thanked the benefactors for upgrading the software from its initial stage to address the needs of patients against COVID-19.

Dr Kuma-Aboagye, said the although COVID-19 seemed to have dominated the media landscape, the MOH and its agencies had not forgotten about existing disease programmes and other health interventions, and that all health conditions were being given equal attention.

“We do not want to win the fight against COVID-19 only to realise that all other diseases of public health importance have become a major concern to us as a nation,” he stated.

The Director –General, therefore, encouraged all heads of agencies and development partners not to forget about “our existing and unfinished businesses,” but continue to do all they could, to maintain a high level of standards in supporting all ongoing activities, programmes and projects, and pay equal attention to all.

Dr Eric Sarpong-Ntiamoah, the Medical Superintendent of the Ga West Municipal Hospital, thanked the Dutch Government for its benevolence, and appealed to the MOH to consider the Ga West Municipality as a beneficiary in the 88 district hospitals the Government had promised to build across the country in its quest to improve healthcare infrastructure in Ghana, and to act as an adjunct training centre for doctors, nurses and other paramedics.

He said the Hospital currently was burdened with many challenges, which included limited space for maternal case admissions, inadequate delivery beds, consulting rooms, antenatal clinics, and lacked state-of-the-art equipment at its Emergency Unit, Wards and Theatre.

These deficiencies, the Medical Superintendent said, often had negative impact on access to quality healthcare services at the facility, which served a population of more than 200,000 in the Ga West Municipality and beyond, and was currently the only and highest referral hospital in the locality, with a record average of 72,000 outpatient and 8,500 inpatients annually.

Dr Sarpong-Ntiamoah said the Emergency Unit of the Hospital provided services for more than six thousand patients annually, (more than 16 patients daily), and had since the outbreak of the COVID-19 pandemic, recoded a total of 176 positive cases with 34 of its staff being among those infected.