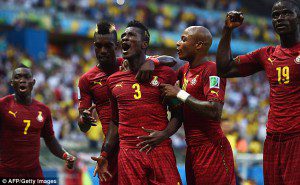 Former Black Stars midfielder, Mohammed Gargo agrees with Asamoah Gyan’s claims that he is the most the dedicated Black Stars player.

The Ghanaian captain in his latest interview claimed that he is the most dedicated Black Stars player after facing heavy criticism from the media in the past.

The Shanghai SIPG striker added that he sometimes played through pain despite medical instructions just because of the love for his country.

“For me nobody has been dedicated in the national team more than me.”

“In the World Cup knock out stage against USA I was very sick, I was down with Malaria. The doctor warned me not to go but I ignored him because I wanted to play for Ghana and in the game and I scored the winning goal,” Gyan said in his earlier interview.

“Obviously Asamoah Gyan is very dedicated. Because in his generation he has won more awards than any other person in Ghana. It got to a point things went bad for him when he wasn’t scoring and people rained insults on his family.”

“If Gyan was a different person, he would have quit the Black Stars because is not everybody who has that heart to take such insults, but he forgot those things,” Gargo told Kumasi based Ash Fm.

Though Gyan is yet to win any major silverware with the Black Stars he is currently the all-time top scorer for the team with 48 goals in 95 caps.