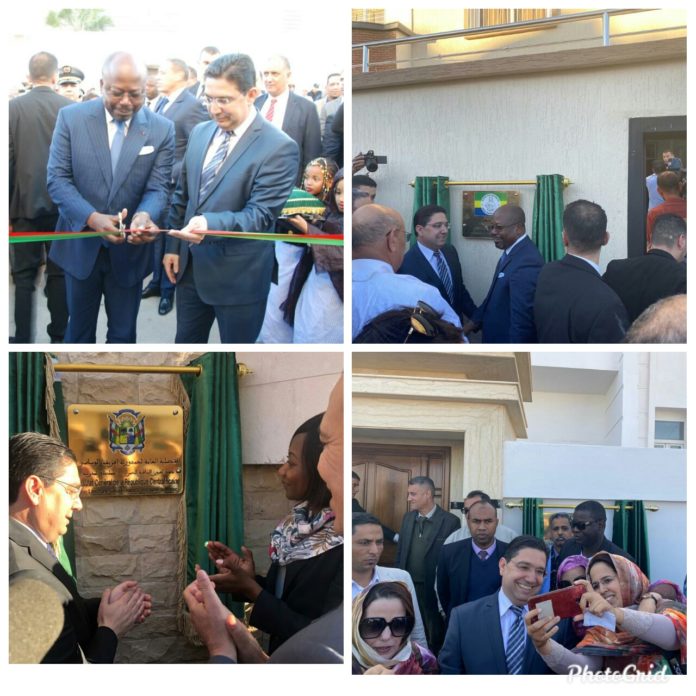 As part of activities to promote Africa Unity and deepen the good relationship between African countries , The Kingdom of Morocco has opened up its territories to its African neighbors to live together for the mutual benefit of all.

Great countries like The Gambia, Comoros, Gabon and Guinea have opened consulates in Morocco in a bid to reach out to their nationals in Morocco and work closely with the government of Morocco to deepen their relationship.

Following the announcement made by the Minister of Foreign Affairs, African Cooperation and Moroccans Living Abroad, during the festivities that marked the fiftieth anniversary of the organization of Islamic Cooperation, the Gambian Proceeded with the opening of a General Consulate in Dakhla.

The opening of the General Consulate follows the inauguration of a General Consulate by the Union of the Comoros in Laayoune on December the 18th. These are considered as two important diplomatic events that consecrate the Moroccan aspect of the Sahara.

The decisions made by the two countries to open General Consulates in the Moroccan Sahara represent an act of sovereignty that obeys to the diplomatic rules and customs in all ways.

The opening of the General consulates intervene in a context of strengthening the bilateral relations with these two African brother countries, all in the benefit in the African countries’ interests, in accordance with the Vienna convention on the establishment of consular relations of 1963.

These four important diplomatic events represent a collective recognition that the Sahara is Moroccan. Creating a momentum for the confirmation of the Moroccan sovereignty on the Sahara region.

The decision made by these four countries to open their General Consulates in the Moroccan Sahara represents an act of sovereignty, that is in full conformity with diplomatic rules and practice.

This new dynamic will continue as other countries will soon open their General Consulates in the Moroccan Sahara.

The opening of these four diplomatic representations in the Moroccan Sahara illustrates both a recognition of the African Vision of His Majesty the King in favor of a strong inter-African cooperation in the continent and a strong testimony to the security and stability which prevail in the Sahara Provinces of the Kingdom of Morocco, particularly within an increasingly tumultuous and volatile regional context.

The four African countries, which opened their diplomatic representations, feature 3 out of 5 sub-regions of the Continent (West Africa, Central Africa and Southern Africa). These diplomatic acts with a continental scope will bring about reactions of other brother/sister countries and friends of Morocco.

Other countries are expected to follow the step soon after the Union of Comoros, Guinea, Gabon and Gambia . The countries having opened consulates in the Moroccan Sahara are animated by the double willingness to develop their bilateral relations with the Kingdom of Morocco as well as to ensure consular services in favor of their citizens living in the Moroccan Sahara.

It is to be emphasis that many African brother countries have numbers of their citizens who are established with their families in the cities of the Moroccan Sahara, where they are perfectly integrated, given the bold politics of migration and asylum, initiated by His Majesty the King, may God assist him and praised internationally.

The opening of these diplomatic forums in the Moroccan Sahara is both a recognition for His Majesty the King’s African Vision for a continent animated by strong inter-African cooperation, and a strong testimony of the security and stability of the Saharan provinces of the Kingdom in a tumultuous regional context.

Finally, it should be emphasized that these two important diplomatic events consolidate the image and the influence of the Moroccan Sahara as an anchor point for the Kingdom of Morocco in its continent of belonging, that His Majesty the King, may God assist him, wishes to become a pole of development within the continent.