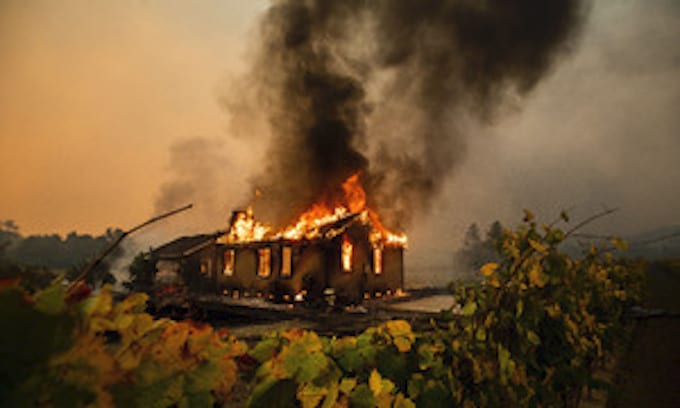 California’s largest utility is planning for more power blackouts this week due to severe winds forecast for the state early this week, as a major wildfire ravages parts of Northern California.

The Kincade Fire in Sonoma County has burned about 55,000 acres so far and is still burning mostly out of control, authorities said.

The Soda Rock and Field Stone wineries were totally destroyed by fire.

The flames have destroyed nearly 100 structures and put 80,000 others are at risk.

The blaze was just 5 percent contained early Monday. The fire has led authorities to evacuate more than 180,000 residents.

The scheduled blackouts follow others that have affected millions of California residents so far this month. The strategy is aimed at mitigating the risk of equipment failure and wildfire.

“[The blackouts are] expected to impact portions of 32 counties in the Northern and Southern Sierra, North Bay, Bay Area and Santa Cruz mountains, North Coast and Kern County.”

PG&E said it has given a half-million customers a 48-hour notice of the impending blackouts.

California Gov. Gavin Newsom declared a state of emergency over the weekend as a number of wildfires burned across the state.

The utility said Sunday more than 1 million customers have been affected by both planned and unplanned blackouts in recent days.