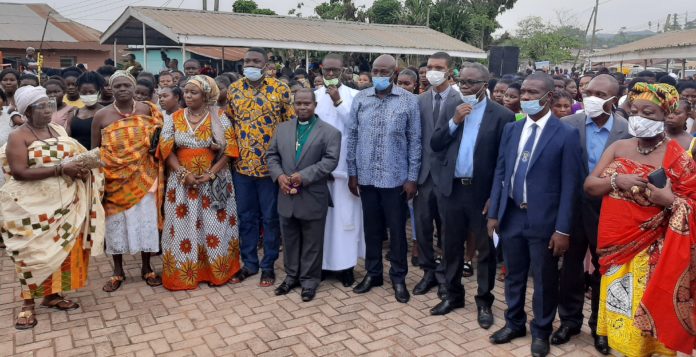 Three-hundred and forty-nine youth have been enrolled into various apprenticeship training programmes under the Okere District Empowerment Fund (OkDEF) to create job opportunities for them.

The OkDEF, initiated by the Okere District Assembly and the Member of Parliament (MP) for the area, has engaged 133 master craftsmen of various trades to train the 349 apprentices.

It is funding the cost of the apprenticeship fee, professional NVTI examination and start-up tool kits to establish their businesses after the training.

The beneficiaries, included 166 apprentices in dressmaking, 102 in hairdressing and beautician, nine in photography, and two in Graphic design.

At a colourful ceremony attended by the chiefs, queen mothers and representatives of the seven major towns and members of the clergy to outdoor the beneficiaries and the master craftsmen to the people, Mr Dan Botwe, MP for Okere, announced that the Ministry of Special Development Initiative had presented 100 sewing machines for distribution to the mastercraftsmen to support the training programme.

He said the initiative was in line with government’s agenda of ensuring that the youth were empowered to create their businesses and jobs for a sustainable livelihood and appealed to the beneficiaries not to take the gesture for granted.

Mr Botwe appealed to the beneficiaries to take the training seriously to chart a course for their own lives.

He said just as the free SHS policy was ensuring that thousands of young people had secondary education so would the apprenticeship programme.

He urged the young women to stay focus on the training and appealed to the master craftsmen not to sack anyone who got pregnant during the period of training.

Mr Daniel Kenneth, Okere District Chief Executive, said the Assembly’s needs assessment showed that more than 600 young men and women had no employable skills nor any skill to use as a source of livelihood.

That finding, he said, led to consultation with stakeholders, resulting in the apprenticeship programme for the youth to be sponsored to learn a trade of their choice and be provided with start-up tool kits to set up their won businesses after completion.

Mr Kenneth said GhC300,000 was made available for the programme and an arrangement was underway to collaborate with the Vocational Training for Females (VTF) programme to train them in entrepreneurial skills development.

Awo Ansah Lartebea, the Queen mother of Awukugua, urged the beneficiaries to focus on the training to secure their future.

She said although the programme gave the allowance for pregnant beneficiaries to continue with the training, it was not in their best interest to get pregnant when there was no source of livelihood.

She described the opportunity as a game-changer for the youth in the area who had no employable skill or source of livelihood and urged the beneficiaries to take charge of their future and complete the training to be self-dependent.