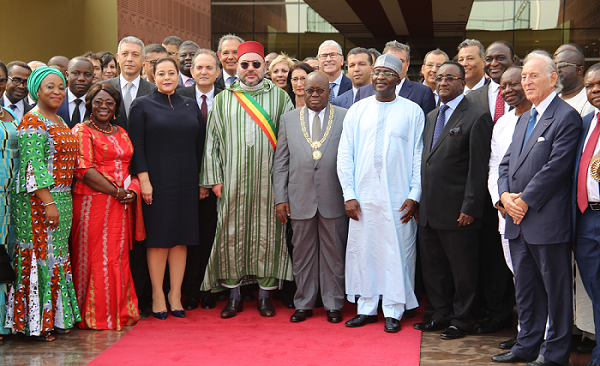 Its coast on the Atlantic Ocean moves past the Strait of Gibraltar to the Mediterranean Sea. Across the strait, Spain borders it to the north.

Algeria borders to the east and Mauritania to the South. The country has an elected parliament and is a constitutional monarchy. There are two houses of parliament, the Assembly of Councillors and the Assembly of Representatives. Rabat is the capital and Casablanca is the largest city.

Morocco’s African foreign policy is neither a new nor a recent phenomenon. Morocco was a founding member of the Organization of African Unity (1963); indeed, the congress that inspired that organization was held in Casablanca, Morocco, in 1961. Under Kings Mohamed V and Hassan II Morocco had strong links with several African states, prominent among which were Senegal and Gabon, as well as Guinea and former Zaire.

Since ascending the throne, King Mohammed VI has been committed to enhancing Morocco’s strong relationships with its sister African countries.

Morocco has engaged in regional diplomacy to counter violent extremism; increase trade and investment; and promote economic and human development projects as a means of promoting regional integration, stability and security throughout the continent.

•King Mohammed has made over 50 visits to African countries during his reign, resulting in more than 1,000 cooperation agreements on economic, political, security, and educational issues.

In January 2017, at the 28th African Union Summit, 39 of 54 member states agreed to admit Morocco to the pan-African organization after a 33-year hiatus. In a visionary speech at the Summit, King Mohammed VI reaffirmed his country’s “commitment to the development and prosperity of African citizens” and pledged to “help bring about unity and progress” to the continent.

•Joining the AU was a crowning achievement to King Mohammed VI’s diplomatic efforts, wherein a key priority has been fostering relations with neighboring countries in West and Central Africa.

Promotion of the values of peace and tolerance
•The Kingdom of Morocco abides by a religious frame of three pillars: Sunni Maliki Islam, the Ash’ari doctrine, and Sufism.

This frame, coupled with Morocco’s openness and perpetual interaction with cultures and civilizations throughout its history, give Moroccan Islam its flexibility and moderation. Sufism is also a key ingredient of spirituality in Morocco’s brand of moderate Islam. These components—law, creed, spiritualism, and culture—together comprise the Moroccan brand of Islam, differentiating it from other interpretations of Maliki Islam elsewhere around the world.

•The Tijaniyyah , is one of the largest orders of sufi Islam in West Africa, and worshippers continue to make annual pilgrimages to the zawiya (religious monastery) in Fez, Morocco, where the order’s founder, Sidi Ahmed Tijani, died.

•In 1963, the late King Hassan II hosted the first Durus Hassaniya or “religious discussions” during the holy month of Ramadan.

This series of engagements, which continues to this day, brings together religious leaders and scholars from around the world and especially from sub-Saharan African countries for conversations about different Islamic topics.

•In June 2016, the King inaugurated the Mohammed VI Foundation for African Oulema, with a mission of strengthening age-old historical and religious ties between Morocco and its African neighbors.

First announced in June 2015, the Foundation brings together 120 Muslim scholars recognized for their knowledge of Islamic law and theology from 31 countries in Africa.

Their aim, as King Mohammed VI explained in a speech at the inauguration ceremony, is “to make sure Islam’s open-minded values of moderation, tolerance and coexistence help us promote security, stability and development in Africa.”

•In March 2015, Morocco inaugurated the Mohammed VI Institute for the Training of Imams, Morchidines, and Morchidates.

The school aims to instill the values of Morocco’s open, moderate form of Islam, based on the Maliki rite and Sunni Sufism, in the next generation of Muslim religious leaders (imams) and preachers (morchidines and morchidates) from across the region and the world.

Imams also receive vocational training in electrics, agriculture or tailoring to enable them to have a source of stable revenue when they return home.

•Pope Francis visited the imam training institute during his trip to Morocco in March 2019.

•Since late 2013, Morocco has signed agreements or entered into negotiations to train imams from a number of countries across Africa, including Chad, Cote d’Ivoire, Gabon, Guinea, Kenya, Libya, Mali, Niger, Nigeria, Senegal, and Tunisia, as well as from Belgium and France. Currently, in addition to 250 Moroccans, 447 foreign students are enrolled.

Trade and Investment
•Morocco is the second largest African investor in the continent. The African Development Bank estimates that 85% of Morocco’s outward foreign direct investment (FDI) went to sub-Saharan Africa in 2016.

•In 2017 Moroccan investment in Africa was $4.75bn, up from $3.4bn in 2016, according to the World Investment Report 2017 compiled by UNCTAD. Its portfolio of investments is wide-ranging and far-reaching, in sectors including phosphates, banking, construction, telecoms and consumer goods such as homegrown textiles.

•As Moroccan trade in West Africa took off in the early 2010s, the Kingdom quickly became one of the best performing economies in the Maghreb region. It grew at a pace of 3.1% in 2018 according to the IMF.

•The country emerged as the continent’s second most attractive investment destination in the 2018 Africa Investment Index (AII) compiled by Quantum Global Research Lab. The rating was based on the size of its economy (the sixth largest in Africa), receptive business environment, low-risk profile, and strong social capital.

•Morocco is a member of regional economic and trade bodies, including the Arab Maghreb Union (AMU), the Community of Sahel-Saharan States (CEN- SAD), the Greater Arab Free Trade Agreement (GAFTA), and the Euro-Mediterranean

•Moroccan banks operate in 25 African countries outside of Morocco – BMCE bank operates in 16, Attijariwafa Bank in 14, and Banque Populaire in 10.

•Maroc Telecom operates in 9 countries outside of Morocco, with a subscriber network of 51 million – the largest in French-speaking Africa.

•Moroccan businesses are also active in the insurance and pharmaceutical manufacturing sectors, as well as in the production of fertilizers derived from Moroccan phosphate for distribution on the African market.

•Morocco’s economic presence in Africa seeks to promote the development and stability of the continent through mutually profitable cooperation and active solidarity. It pursues shared interests with its African counterparts.

•Currently, 16,000 students from the rest of Africa are enrolled in Moroccan universities, 90% of them on scholarship.

•Morocco is a leader in fighting climate change on the continent. As host of COP22, the Kingdom held an “Africa Action Summit” to establish a common approach to the issue and actionable measures for sustainable development. Key priorities include climate justice, adaptation financing, agricultural initiatives to improve productivity and food security, and capacity building and expertise sharing, particularly in the field of renewable energy.

On the sidelines of the COP22 the Blue Fund for the Congo Basin Commission was set up on the initiative of King Mohammed VI.