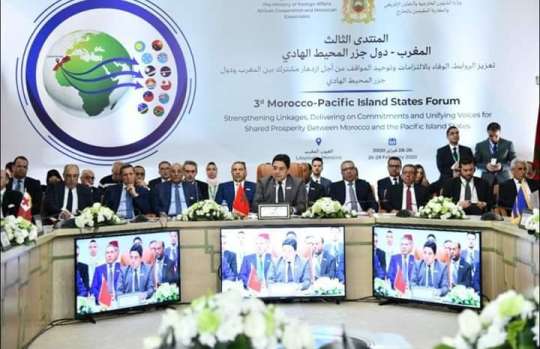 The Third Morocco-Pacific Islands States Forum has ended with an affirmation that the Sahara Region is an integral part of Moroccan territory.

The Heads of the Delegations of the Member States of the Morocco-Pacific Island States in a communique issued at the end of the three-day meeting held in the Moroccan southern city of Laayoune, reaffirmed their common attachment to the principles of sovereign equality, the political independence, and the territorial integrity of States.

The communique also affirmed that the Sahara Region was an integral part of Moroccan territory, and considered that Moroccan Autonomy Initiative was the only and unique solution to the regional dispute on the Moroccan Sahara.

“We support the efforts led under the exclusive aegis of the United Nations towards achieving a realistic, practicable, and enduring solution to this regional dispute in full respect of Morocco’s territorial integrity and national sovereignty.”

The forum held on the theme: “Strengthening Linkages, Delivering on Commitments and Unifying Voices for Shared Prosperity between Morocco and the Pacific Island States”, was to explore ways to enhance bilateral cooperation between Morocco and its partners in the pacific islands.

The communique reaffirmed their commitment to strengthen cooperation between Morocco and the Pacific Islands States for the mutual benefits of their countries, within the framework of South-South Cooperation, in the spirit of solidarity and in line with the national priorities.

“In this spirit, we are grateful to King Mohammed VI for the Kingdom’s vision and will to elevate its relations with the Pacific Islands States to hitherto, unprecedented level in diverse areas of cooperation,” the communique stated.

It said the holding of the third Morocco-Pacific Islands States Forum was a platform to strengthen dialogue on common challenges and enhance cooperation in the areas of shared interest between Morocco and the Pacific Island States.

It welcomed the ongoing endeavours in the areas of education, technical cooperation in the sectors of vocational training, agriculture, health, fisheries, tourism and climate change.

The communique recognised and welcomed the ownership, leadership and considerable efforts that had been made by the Pacific Islands States in advancing the implementation of the Small Island Developing States Accelerated Modalities of Action Pathway (SAMOA Pathway) and Sustainable Development Agenda.

It said in this regard, the Government of Morocco intends to continue providing support to the participation of the Pacific Islands States to the Conference of Parties of the United Nations Framework Convention on Climate Change.

“We remain concerned about the adverse impacts of climate change, especially those related to coastal erosion, sea level rise, natural disasters and extreme weather events, which continued to pose a significant risk to Pacific Islands States and to their efforts to achieve sustainable development and, for many, represent the gravest of threats to their survival and viability, including, for some, through loss of territory, as well as through threats to water availability and food security and nutrition,” it said.

It said in this regard, they would endeavour to strengthen their dialogue and cooperation, through innovative approaches and solutions, exchange of experiences and good practices, South-South Cooperation and triangular cooperation, and capacity building particularly in the fields of food security and nutrition, health, sustainable tourism, integrated coastal zone management approaches, renewable energies, education and training.

“We will build on the experience and the potential of the initiatives launched by the Kingdom of Morocco notably, the Initiative for the Adaptation of African Agriculture, the Initiative to promote Stability, Security and Sustainability, and the Commission for African Island States launched at the First Africa Action Summit for Continental Co-Emergence, held on the sidelines of the Conference of the Parties (COP22) in November 2016.

The communique announced that Morocco expressed its will to join the Group of Friends on Climate and Security, and leverage its membership of this Group to share its experience in the fields of climate change adaption and migration.