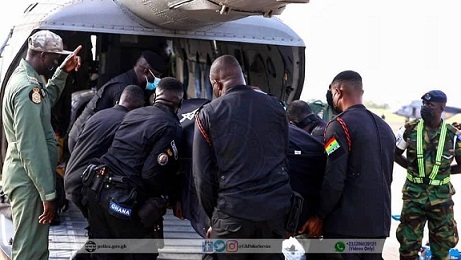 The mortal remains of the two Police officers who lost their lives in the fatal accident along the Walewale-Bolgatanga road have been airlifted to Accra.

A statement signed by Assistant Commissioner of Police (ACP) Kwesi Ofori, Acting Director-General, Public Affairs and copied to the Ghana News Agency said a special ceremony and Police parade were held at the Tamale Airport in the Northern Region before they were brought to Accra.

It said Dr George Akuffo Dampare, the Inspector-General of Police (IGP), and other senior officers flew into Tamale yesterday morning for the exercise.

The statement said the bodies were received in Accra by some members of the Police Management Board, led by Commissioner of Police (COP) Mr Christian Tetteh Yohuno, the Director-General Administration, and other Senior Police Officers together with the bereaved families at the Airforce Base about 1830hrs.

It said three injured officers were also airlifted in the morning of the same day to Accra for further medical care.

It lauded the doctors and nurses at the Tamale Teaching Hospital, Walewale Government Hospital, and the Police Hospital in Accra for their immense support.

The statement also expressed its profound gratitude to the good people of Ghana and beyond for their sympathies.