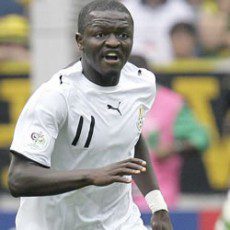 Moses Armah, a member of the Black Stars management committee, has said, he has forgiven Sulley Muntari for the attack on him during the 2014 World Cup in Brazil. Armah, who was physically assaulted in Brazil by Muntari, told the Justice Senyo Dzamefe Presidential Commission of Inquiry that he was a devout Christian and had decided to forgive the player.

According to him, he had been a fan of Muntari for years and had a photograph with him hanged in his room and therefore had since found the heart to forgive him.

He however urged the Commission, to invite Muntari to explain his conduct in Brazil.

?My Lord, Muntari should be invited to the commission to explain why he attacked me because his conduct was unprofessional. I was surprised and shocked at his conduct, because I never knew he could do such a thing,? he stated.

On whether Muntari should be given the chance to play for the Black Stars again, he said the player must be made to apologise to the GFA and the entire nation before being given the chance.

?He is a good player and will be useful to the Black Stars, but he must apologise first to merit a place in the team?.

Armah, also apologised to the nation for reacting to the attack on him by Muntari. ?I think I should not have reacted to his attack. I lost my temper in an attempt to defend myself?.

He said, the amount was given to him by Felix Ansong whilst in Brazil, but added he did not sign for the money received.

Armah added that he received $8,000 from the president of the Ghana Football Association (GFA), Kwesi Nyantakyi, as compensation for items damaged by Muntari.