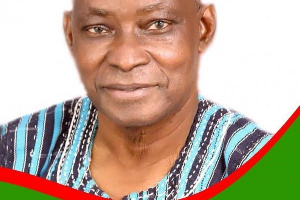 Mr Moses Dani Baah, a former People’s National Convention (PNC) Member of Parliament for the Sissala East constituency has expressed interest in contesting the National Chairmanship position of the party.

Mr Dani who was the Member of Parliament for the then Sissala constituency from 2000 to 2004 was also the Deputy Minister of Health in then-President Kufuor administration.

He won a second term and represented the then divided Sissala East constituency between 2004 on the same ticket of the PNC.

Mr Baah said, “having represented the Sissala people on the PNC ticket in Parliament and left for other people to take the button, I’m now ready to take up the leadership of the party at the national level as the chairman”.

The former legislator in an interview with Ghana News Agency in Tumu said, “Some of the executives have indicated that, they are tired and needed to be taken up by other people with new blood and ideas to lift the party fortunes”.
Mr Dani Baah said, “I have served in both as a legislator and the executive arm of government and this puts me in the right frame of mind to lead the PNC party coupled with my experience in the party”.

“He blamed the weakness of the PNC to weak leadership and problems and advocated a change in the direction of the party to bring it back to where it was”.

“PNC used to be one of the vibrant political parties in the past in the Sissala East constituency and Ghana and questioned why the Sissala people were turning their back to the party they loved”, he said.

He promised to lead them in a manner that will make everyone a part of the party and endorsed the candidature of Mr Kingsley Kassim Kanton as the Sissala East PNC parliamentary candidate to lead the party going into the 2020 election and called on the masses to vote for him to represent them in parliament for effective leadership.