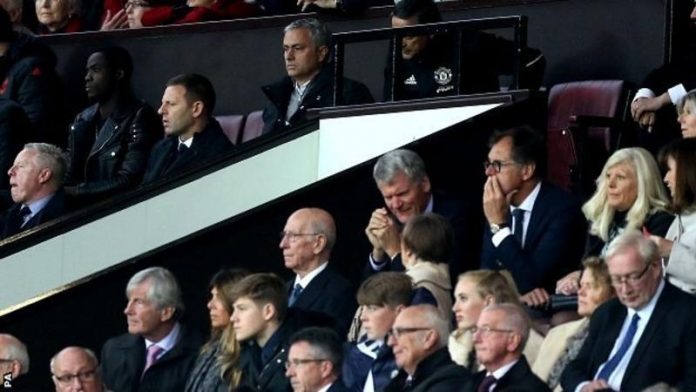 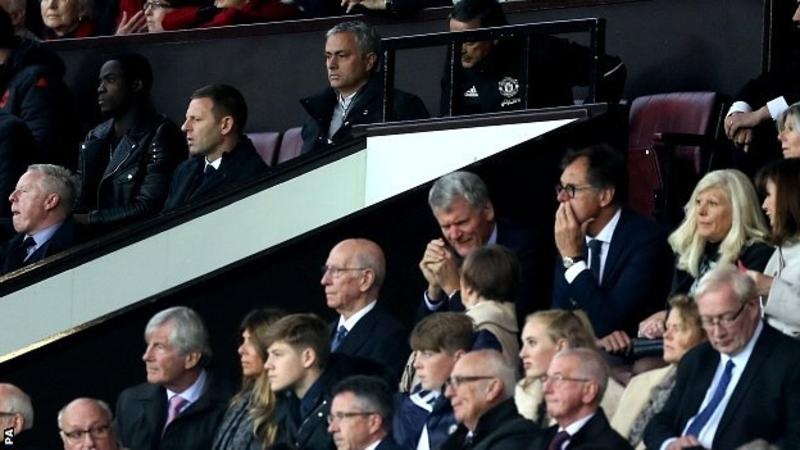 Manchester United manager Jose Mourinho was sent to the stands at half-time in the 0-0 draw with Burnley in the Premier League on Saturday.

Mourinho emerged for the second half and was escorted to a seat in the stands at Old Trafford as his side dropped to eighth in the table.

The 53-year-old Portuguese then moved to the directors’ box.

Referee Mark Clattenburg had dismissed a Manchester United penalty appeal late in the first half.

“I think the events of recent weeks have got to him,” said MOTD pundit Danny Murphy. “I think that it was a penalty, though.”

It comes after a week in which Mourinho was charged by the Football Association for comments he made about referee Anthony Taylor and also said living alone in Manchester is a “bit of a disaster”.

United are eighth in the Premier League and without a win in their past four games. Mourinho has taken 15 points from his first 10 league games in charge of the club – two fewer than David Moyes.

Mourinho did not speak to the media after a match which United dominated, with 37 efforts at goal.

Assistant boss Rui Faria told BBC Match of the Day: “I don’t know what happened. It is not important what Jose said. What is important is what the referee writes in his report.”

United, who have won only one of their past seven league games, are eight points behind Manchester City, Arsenal and Liverpool, all of whom won on Saturday.

Mourinho must ‘face up to it’

“He’s still only had 10 games in the league so he needs time. But he needs to start doing better.

“United is a different animal to managing Chelsea. It’s the biggest club in the world with Real and Barca.

“Getting sent off today, not doing the press conference after… come on. You’re managing the biggest club in the world; you have a global responsibility to all of the fans across the world.

“You have to face up. He’s got to go in there and not say anything about Mark Clattenberg; he’s just got to be sensible. I want to hear from him because I love listening to him.”

“I think the referee did fantastic work. I won’t say more than this,” said Faria.

Mourinho was seen passing notes to coach Ricardo Formosinho, to get his messages from the stand to the dugout.

Faria added: “Sometimes a detail is important, and the information could arrive.

“It wasn’t because of that [that United only drew 0-0] because the team did fantastic work from the first second and we were dominant with 11 men and also with 10 men.”

With 90 years of journalistic excellence, Xinhua stands ready to grow with Africa