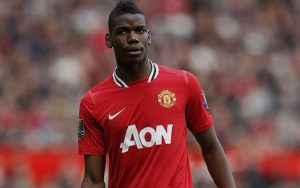 Manchester United manager, Jose Mourinho, says Paul Pogba is a potential Ballon D’Or winner, if those who vote will change their perception that only forwards can win the prize.

Pogba produced another fine midfield performance and scored the winner, as United defeated Middlesbrough 2-1 on Saturday.

United’s world-record £89million signing, is beginning to show glimpses of why he cost that much and Mourinho has said the 23-year-old is the best midfielder in the world .

“What has to change is people’s minds, because a goalkeeper never won the Ballon d’Or and it’s very rare a defender wins it — Paolo Maldini never won it,” Mourinho said.

“Even for midfielder players it’s not easy, because everybody goes for the goalscorer.

“Michael Owen won the golden ball because of his goals, and Cristiano and Messi score goals. They are phenomenal players, but I think until you change the concept and the vision, it’s very difficult.

“But if Paul keeps improving in this way, if Manchester United keep improving and doing well in European football, then I think he can be a phenomenal player.”

Pogba has scored six goals for United so far this season and Mourinho says he can become a free-scoring midfielder like United legend, Paul Scholes.

“He gets into dangerous positions,” Mourinho added.

“Today he almost hit someone that was behind the goal, but he is a good free-kick taker so he can score goals like that. He’s a good penalty taker too — but that’s no problem because we don’t get penalties!

“He has a lot of qualities to score goals, so let’s see.

“At this moment we’re thinking more about the team than individuals, because we have so much to improve on. But let’s see what happens.”