Mr Moses Anim, the Member of Parliament for Trobu Amasaman has assured the people of Omanjor and its environs that plans had been put in place to allow free-flow of water during rains to avert disasters. 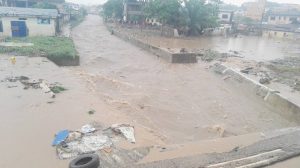 He said the members of the Residents Association in the area had agreed to collaborate with the authorities of the Ga West Municipal Assembly to remove structures on waterways and other places.
Mr Anim gave the assurance at a Town Hall meeting organised by the Assembly and was attended by community members from Omanjor, Dwenewoho, Amamoley, Asofan, Adom and California.
He told the Ghana News Agency in an interview that activities of some residents had caused severe flooding in the communities and that they could not wait any longer for such a situation to recur.
Nana Kwame Agyeman, the Physical Planning Officer of Ga West advised landowners to desist from encroaching on roads and waterways and that structures on unapproved spaces would be demolished.
Mr Samuel Larweh, the Coordinator for the Greater Accra Metropolitan Area – Sanitation and Water Project advised the people to take advantage of the project to own a household toilet at half price.
He said the government would bear 50 per cent of the cost of the provision of the toilet facility, while the household took the other half and that those who could not afford would have other options.
The options include; loans from selected micro finance institutions such as HFC Bank which could be repaid in installment, Mr Larweh said.
The Coordinator said landlords and households could have the opportunity to make installment payment towards the half cost of the project.
Mr Larweh called on resident associations of the Municipality to help their members to form groups to contribute under ‘Susu’ scheme towards the construction of the household toilets.
GNA