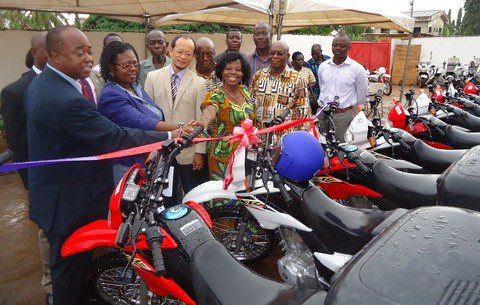 The Jomoro District Coordinating Director (DCD), Mr Abudu Amadu, disclosed this in an interview with the Ghana News Agency at Half-Assini.

He said the cost of the motorbikes were not immediately known, but added that the MP procured them from his share of the District Assembly Common fund.

The DCD said the items were presented to the Assembly by the Secretary to the MP, Mr Francis Horbah.

He hinted that the motorbikes would be given to some decentralized departments under the Assembly, to make them mobile.

The Coordinating Director urged the beneficiary departments to handle them with due diligence to prolong their life span.

The DCD further disclosed that the MP had earlier donated 20 street light bulbs to the Assembly.

According to him, the bulbs had since been released to Beyin and Half-Assini communities to complete their street lighting projects.

The District Coordinating Director said the MP donated 140 footballs and 120 sets of jerseys to the Assembly for distribution to some football teams in the district, adding that the gesture was to promote sports in the district.

He expressed his profound gratitude to the MP for his kind gesture to the district.

The MP is not seeking re-election after one term in office.