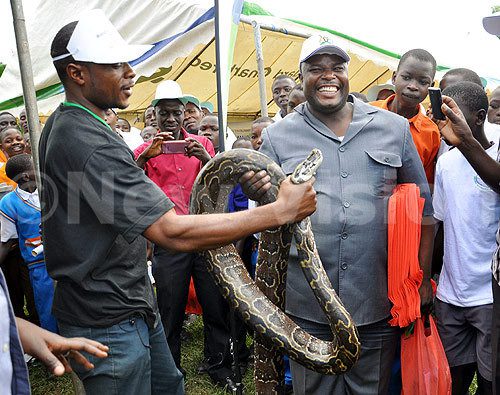 MP Jacob Wangolo was hesitant at first, but as soon as he loosened up, it was a moment of excitement. (Credit: Francis Emorut)

His was an intimate contact with a Python sebae, commonly known as African rock python.

It is Africa?s largest snake and one of the five largest snake species slithering on Earth?s surface, so legislator Wangolo had every reason to want to keep his distance.

Luckily, he did not have to. Despite being on top of the continent?s snake size list, the African rock python is not venomous.

It is no wonder MP Wangolo eventually became excited about having a physical feel of the reptile after he was told of this fact.

He was at Kiteredde Secondary School in Rakai district, along with some other MPs, for a World Environment Day exhibition on Friday.

The deadly snake ? despite being nonvenomous, it can still kill ? weighing 70kg, was being exhibited by the Uganda Wildlife Education Centre, commonly known as The Zoo.

Dan Mirembe, the reptile?s caretaker, spotted MP Wangolo eyeing the snake, but from a distance. So he invited him to draw closer and touch it, assuring the timid lawmaker that it would not bite him.

Finally the lanky MP, donning a grey Kawunda suit and a white cap, gathered courage and had a feel of the python with one hand.

He beamed in delight as he felt the weight of the mighty reptile.

After his experience, he told New Vision that it was his first time to touch a snake and that he felt good about it.

The snake was one of the main attractions at the exhibition, drawing the attention of keen students and pupils. Rakai district leaders, among other people, also showed up at the display.

After having a feel of the African rock python, Wangolo was told by the caretaker to wash his hands with soap and water to avoid skin infection.

The snake?s minder told those that had gathered around him that the python can kill prey three times its size.

And the reason, according to Mirembe, is simple: the reptile can open its diaphragm at a staggering angle of 170 degrees, plus its ability to release enough saliva to lubricate its prey.

After swallowing a significantly large prey whole, it can take the African rock python up to six months to digest the meal ? during which the snake remains largely dormant.

Zoo-keeper Mirembe added that the reptile can live up to 30 years.

By Francis Emorut, The New Vision