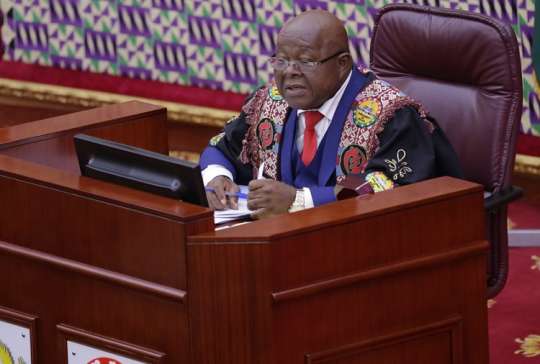 As Ghana prepares for general election in December, Speaker of Parliament Aaron Michael Oquaye, has urged parliamentarians to leave a mark, rather than allowing “undue interventions” of politicking to mar the dignity of the House.

The sitting, the first of the First Meeting of the Fourth Session of the Seventh Parliament of the Fourth Republic of Ghana would run for eight weeks before it breaks at the end of March 2020, for the Easter holidays ahead Ghana’s elections December.

“Since we are in the election year, I will implore that we do not allow undue interventions into this House, by the politicking that sometime go on outside…..We still want to maintain the dignity and decorum of this noble house,” Speaker Oquaye said, as he welcomed back the Members of Parliament (MP)from the Christmas and New Year break.

He commended the MPs to continue to exhibit professionalism in the discharge of their parliamentary duties, reminding them that the meeting would be demanding and business would move on as a briskly as possible.

“As members of the 7th Parliament, we need to have exceptional zeal and commitment to deliver this mandate; and leave a mark in the history of Parliament of Ghana.”

Speaker Oquaye announced that the House had agreed on the principles and modalities on Private Members’ Bill.
He said the House had received bills, for which he urged all Members to collaborate with the Majority and Minority Leaders and Clerks and Legislative and Drafting Sections in working on them to fruition.

Speaker Oquaye commended the clerks of the House for the reports they produced on trips and assignments during the break, stressing the need to for the Members to do same, and preserve the documents for posterity.

The Speaker reminded the House that President Nana Addo Dankwa Akufo-Addo would be delivering the State of the Nation Address during the meeting, and urged them to continue with the dignified and decorous behaviour they gave him last year.

Mr Osei Kyei Mensah-Bonsu, the Majority Leader and Leader of Government Business said the meeting would be a challenging one as essential bills were before the house for consideration.

He admonished Ministers of State to be punctual with government business, although they had to campaign for the primaries slated for April, 2020.

He urged Members to be charitable to one another; and commit to speak to issues rather than engaging in settling personal scores, as well as helping to retain sitting members for the growth of the House.

Minority Leader Haruna Iddrisu admitted that the year “is critical year for us all, since our democracy will be put to a test again come December 7 to elect President and Members of Parliament.”

He asked the security agencies to demonstrate neutrality this year, and reminded The EC to organise free, fair and transparent election.

Mr. Iddrisu also entreated the media to adequately resource themselves for the coverage of the elections, and stressed the need to be circumspect in their reportage in the interest of Ghana to maintain the existing peace of the nation.

Treaties, conventions and protocols would also be worked on.
The meeting would also feature a number of motions for debate and referrals to committees.