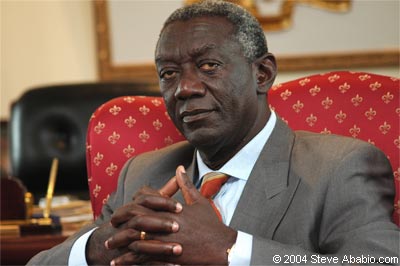 This observation is in no way intended to make him swollen-headed (for God knows I have my own acute misgivings about his partisan loyalty and judgment at critical political moments), but it well appears that former President John Agyekum-Kufuor made governance seem so easy that Dr. Kwadwo Afari-Gyan, the Electoral Commissioner, may just have fathomed that following Mr. Kufuor?s class act, politically speaking, with the clearly incompetent administrative antics that is the hallmark of of the National Democratic Congress (NDC), would not have made much of a difference in our country?s political culture, especially where quality-of-life issues are concerned.

Alas, Ghanaians have become the poorer for Dr. Afari-Gyan?s reckless decision to gamble with our destiny. The debate over whether the Mahama government ought to dip its grimy and kleptocratic fingers into the Ghana Heritage Fund (GHF), at the same time that the overfed residents at the Flagstaff House have been vehemently insisting that the Government is not strapped for cash, ought to sober up any well-meaning Ghanaian citizen, irrespective of ideological stripe, tempted to naively invest any iota of credibility in such patently vacuous official posture.

What is incontrovertibly clear so far, though, is that this problem of acute economic drought may very well have more to do with Mr. Mahama?s having inordinately fielded more clueless key cabinet appointees than a fragile and vulnerable economy like Ghana?s can absorb. And when a Minister-of-State in charge of Finance and Allied Institutions, whatever such administrative designation means, comes out shamelessly and regressively swinging at the very rationale that informed the establishment of the Heritage Fund, then, of course, it is obvious to all that merit and competence are not part of the job description of the Minister-of-State in charge of Finance and Allied Institutions.

I am here, of course, referring to Mr. Fiifi Kwetey, the former NDC Propaganda Secretary who continues to rather curiously, albeit hardly surprisingly, act as a veritable party propagandist instead of a savvy and foresighted financial management expert. By the way, where and how do they come by such people? For those of our readers who may not know about the same, the Ghana Heritage Fund was established by Parliament under the 2010 Petroleum Management Revenue Act. It was not an NDC-driven measure by any stretch of the imagination, as Mr. Kwetey would have his audience believe. Rather, it was a fundamentally Western-driven global wave aimed at ensuring that oil-rich poor Third-World countries like Chad, and now Ghana, pursued the sort of enlightened leadership regime that looked beyond momentary consumerism towards the intelligent provision of an economic headstart for posterity.

And so when Mr. Kwetey asserts that the premise informing the establishment of the Ghana Heritage Fund was squarely predicated on ?abject nonsensicality,? it becomes quite clear that the man has absolutely no business serving in any sensitive cabinet capacity whatsoever. But that Mr. Kwetey also doubles as an NDC-Member of Parliament for Ketu-South, in the Volta Region, makes his pronouncement even more pathetic. But, of course, such scandalous and myopic perspective on our country?s destiny is squarely predicated on plain selfishness.

If Mr. Kwetey can answer any of the following questions in the affirmative, then, of course, it is time for him to get the heck out of the Mahama cabinet. One: Does Mr. Kwetey have any personal bank account? Two: Does he also have a savings account? Three: Does he have any sums of money saved up for the future of any of his children and grandchildren? Four: Does Mr. Kwetey invest in stocks meant for the future upkeep of his wife and family, both nuclear and extended? Five: Does Mr. Kwetey own any real estate or landed property willed to any of his children and/or grandchildren?

I also take this opportunity to encourage civil society organizations to vigorously lobby for the placement on the 2016 ballot, the need to decouple parliamentary duties from cabinet portfolios. In other words, the country needs to get away from the patently unhealthy situation in which Members of Parliament also double as cabinet appointees, not even as deputy cabinet appointees. Both positions are full-time jobs; and it clearly does not appear to me that these full-time jobs can be creditably performed by any one person at the same time. This state of affairs, undoubtedly, is partly to blame for the current lackluster quality of governance in the country.