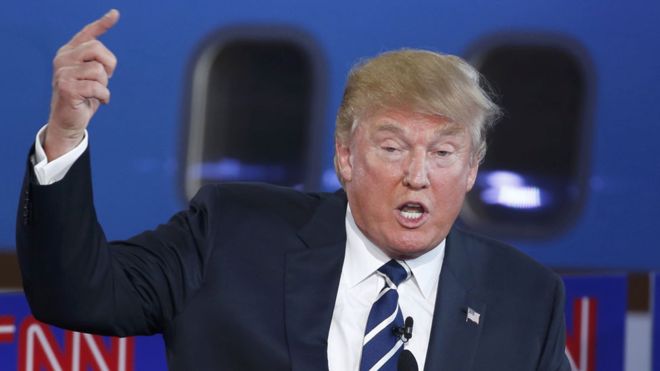 “I know where she went. It’s disgusting,” he said to supporters at a rally in Michigan.

The former secretary of state returned to the stage late after an advert break during Saturday’s debate with her party rivals for the presidential nomination.

Mr Trump also said Mrs Clinton had been “schlonged” by Barack Obama in 2008.

Using a vulgar Yiddish term that means a man’s penis, he was referring to Mrs Clinton’s defeat to the then senator in the primary contests that year.

“Even her race to Obama. She was going to beat Obama. I don’t know who’d be worse. I don’t know. How does it get worse?

“She was favoured to win and she got schlonged, she lost.”

Mrs Clinton’s spokeswoman, Jennifer Palmieri, tweeted: “We are not responding to Trump but everyone who understands the humiliation this degrading language inflicts on all women should. #imwithher”

It is not the first time Mr Trump has referred to women in a controversial way.

In August, he implied that he received tough questions from Fox News debate host Megyn Kelly because she was menstruating.

And he has previously described comedian Rosie O’Donnell as a “fat pig”.

Mrs Clinton and Mr Trump have been feuding in recent days over claims she made that Islamic State militants were using Mr Trump as a recruiting tool.

He has called for Muslims to be banned from entering the US, in light of a deadly terror attack in California carried out by a radicalised Muslim couple.

Mr Trump, a billionaire property tycoon with no political experience, leads the polls nationally among Republican voters, and is also ahead in some key states.

The primary contests begin at the start of February and the presidential election is in November.

Break The Bias In Football – MD Of Guinness Ghana Ltd

We must break stereotypes of women in tourism – GTA CEO

I will not run for US President again – Clinton