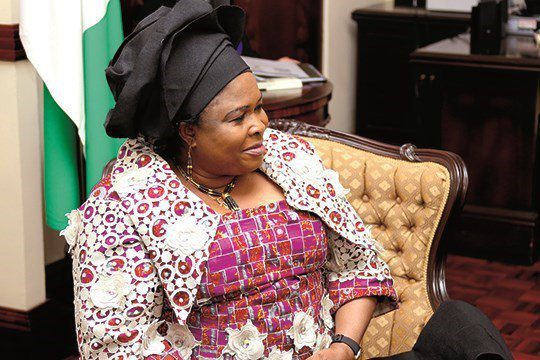 President Goodluck Jonathan?s wife, Patience, has arrived Okrika, her birthplace, for the Governorship/House of Assembly elections. Though she was expected to have been in Otuoke with her husband, Jonathan, to vote in the House of Assembly election, Mrs. Jonathan, in order to possibly force the Independent National Electoral Commission, INEC, to rig the governorship election in favour of the Peoples Democratic Party, PDP, governorship candidate, Mr. Ezebuwon Nyesom Wike, Mrs. Jonathan moved to Okrika to be in-charge of proceedings.

It was gathered that the outgoing First Lady will carry out some undemocratic activities in Okrika all in the bid to secure ?victory? for the PDP.

Mrs. Jonathan, who had been in Port Harcourt in the last 3 days, was ferried into Okrika today at about 3.37pm(local time) in her armoured helicopter.

Soon as she arrived Okrika, Mrs. Jonathan called for a meeting of the largest Okrika families, demanding undiluted obedience from them.

During the March 28 Presidential/National Assembly elections, Mrs. Jonathan had commissioned a local town-crier to disseminate her fiat that whoever voted for any party not PDP, would receive heavy penalty. Ex-militants, most likely following her directives, sacked several families of All Progressives Congress, APC, even as they inflicted degrees of injuries on other parties? members.

Those who dared to express their freedom of choice at the polls were whipped with canes by ex-militants supervised by the First Lady?s loyalists.

Mrs. Jonathan, ?doing her last dance?, in the words of an Okrika source, is reported to have taken steps to capture every vote in Okrika and Ogu/Bolo respectively. Also, she is billed ?for a lot of dirty jobs. From here, Mrs. Jonathan will move to the INEC office in Port Harcourt to supervise collation and the declaration of results?.