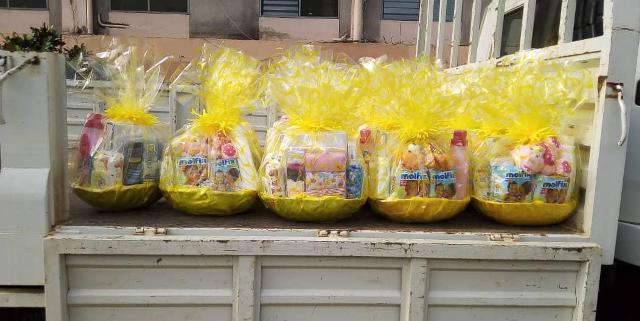 MTN Ghana has distributed hampers with baby care items to mothers who gave birth on Tuesday, December 25 and Wednesday December 26, as well as some expectant mothers at the Mamobi General Hospital and 37 Military Hospital.

The donation is part of MTN Ghana’s Corporate Social Responsibility and plans to make its customers smile as they mark the Christmas festivity.

Mrs Jemima Kotei Walsh, the Corporate Relations Executive of MTN Ghana, said the two hospitals were among the beneficiary hospitals selected from seven regions across the country.
Christmas, she said, was a season of sharing, hence the step by the Company to deliver 150 hampers nationwide.

“It is only right to give back to society because we receive a lot from them, therefore, this is going to be an annual activity to put smiles on the faces of Ghanaians,” she said.

Mrs Edem Adwo Datsomor, a Senior Nursing Officer, who was in-Charge of the Maternity Unit of the Mamobi General Hospital, expressed their gratitude to MTN Ghana for the kind gesture.

She said some of the expectant mothers came on admission without any of the items needed to aid their deliveries, therefore, the items would be put to good use.

She said five babies were delivered on Monday, December 24 by five women; while the same number of deliveries was recorded on December 25.

Mrs Datsomor appealed to the Government and non-governmental organisations to support the Hospital with medical facilities including, Cardiotocography machines to monitor and record the foetal heart beat and uterine contractions during of pregnant women.

She also urged them to support the Hospital with an elevator to aid in the transportation of expectant mothers and mothers who had just been delivered of their babies, to other departments for continuous care.

Mrs Matilda Frimpong, a hairdresser, who was delivered of her third child on December 25, at the Hospital, expressed her excitement on having a Christmas baby and thanked MTN for the present.

Mrs Mariam Sumaila, a trader, who also had a Christmas baby, her second child, said, even though she was a Muslim, her name Mariam was akin to that the mother of Jesus Christ.
“Therefore, it means, I’ve brought Jesus into the world and I am very happy,” she said heartily.

Madam Deborah Boateng, a Principal Nursing Officer at the 37 Military Hospital Maternity Unit, said nine deliveries were recorded on December 25, out of which five mothers went through the normal delivery processes, while four were Caesarean sessions.

Three normal deliveries had , however, been recorded on December 26 at the time of the visit, while four pregnant women had been scheduled for Caesarean sessions.

She appealed to Corporate institutions to support the Hospital with the renovation and expansion of the Maternity Unit as well as medical equipment.

She said the Unit had room for only 60 clients but it received much more all the time because the Hospital was a referral centre.

Mrs Nadiatu Kaseem, a mother of three, who had a Christmas baby there, expressed her appreciation to MTN for the gesture. “These things will help a lot because even though I have not opened the hamper, I can see diapers that of course, the baby would need”.

Mrs Alexandra Adwoa Asamoah, a first time mother , said: “It’s beautiful of MTN to give me this hamper and I didn’t expect it. I am so glad to have my first child on a Christmas day and we will name him, Jesse, meaning, a Gift”