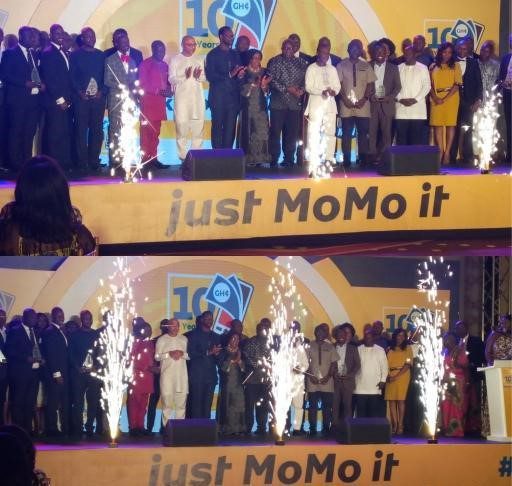 The celebration which was held in a grand-style was also aimed at honouring the stakeholders for their contribution towards the progress of the service.

This he said, MTN is ready to support the government’s agenda to digitise the economy, such as the ‘government to people and people to government form of payment’.

Mr Eli Hini, the General Manager of MTN MoMo, noted that MTN Ghana needed a committed leadership and workers to sustain MoMo when it was launched in July 21, 2009.

“From less than 100,000 subscribers after 6months of launch, our registered subscriber numbers have reached the 14million milestone over this 10-year period. We started with 9 partner banks and now we have 18 partner banks, with the 19th on the way.

As at the end of November this year, we had over 140,000 active Mobile Money agents. We also have over 5000 mobile agents/canvassers. Some of these agents and canvassers, prior to the introduction of MoMo had no meaningful employments.

With the increase in numbers came the change in Technology partners. From Fundamo we “ported” to Ericsson seamlessly in Oct 2015 and got our ISO accreditation in the first quarter of 2016, the first in the industry.

A decade down the line, MoMo has become the foremost financial Services platform in the country. We are proud of this achievement,” he explained.

Today we are here to appreciate the stakeholders with citations and plaques for their contribution towards the success of the service.

Other categories were; the ‘MoMo Fintech Pioneer’ – IT Consortium, and CoreNett Limited, and ‘Emerging and Innovative Fintech Partner’ – ‘appsNmobile Solutions’.

Individuals were also awarded for their contributions to the success of MoMo.

Others were; Mr Bruno Akpaka as the ‘MoMo Master Minder,’ Mr George Nenyi Andah as the ‘MoMo Brand Builder,’ and Mr Ebenezer Twum Asante as the ‘MoMo Game Change.’

Mr Eli Hini, however, applauded the staff and all stakeholders including; MoMo agents and customers for sustaining and contributing to the growth of the service.

He cited fraud as one challenge the network faced with the MoMo service, however, the company had invested heavily to control the canker.

Minister for Finance Mr Ken Ofori-Atta in a speech delivered on his behalf commended MTN for providing jobs for almost half of the population.

He encouraged MTN to work directly with microfinance institutions to drive growth of the financial sector.