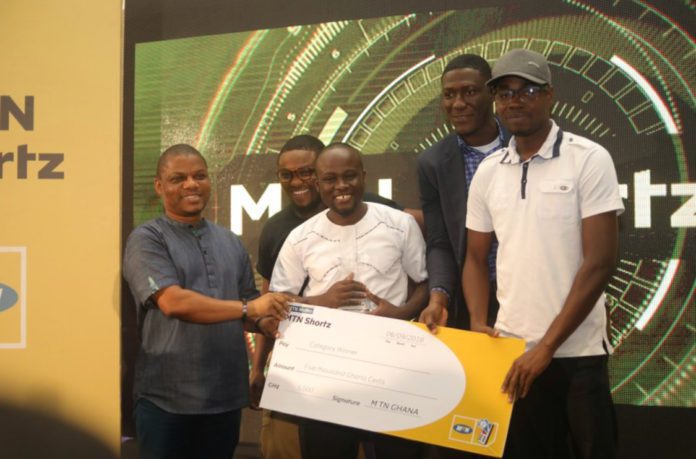 MTN Shortz Challenge has ended successfully in Accra, as the producers of the Overall Best Video titled: “Lost” won GH₵15,000.

This short film which was shot by JMKAD FILMS also won the best category Short film category, as they walked home with two plaques an amount of GH₵ 20,000.00.

Besides, winners of the various categories also took home a cash prize of GH₵6,000.00 each. The Winner of the special award received GH₵5,000 via MTN Mobile Money.

The MTN Shortz platform was launched to create an opportunity for content developers to help them monetize their creation.

This an innovative platform also empower their customers digitally and also serve as a reference point for them to access short video content like comedy, animation, podcast, games and films.

The Senior Manager, Products & Services, of MTN Ghana Mr. Bless Sefenu Agordjo, speaking at the awards ceremony, noted that they received a total of 367 entries. This he said, 200 entries from the Short films category.

“This was followed by Comedy videos with 113 entries. Most of the entries were very good and impressive.

The entries received were screened by eminent judges with vast experience in the field of video production. We are indeed confident about the success and future of digital content creation”, he explained.

In this regard, MTN held 2 digital workshops in Accra and Kumasi to support content developers to learn how to produce short videos and also took them through the basics in cinematography, directing, script writing among others.

The objective was to help content developers acquire the needed skills to produce competitive videos that can sell in the global space.

Mr. Agordjo, therefore urged all persons with creative abilities and talents to take advantage of the digital space, be innovative, showcase their good work and make money.