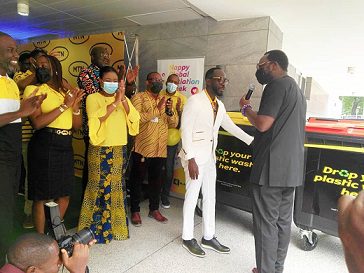 As a business, the company started source separation of its waste at the MTN House in February 2017. To date, they continue to separate waste into three streams namely plastics, cardboard, and organic waste.

Through their annual 21 days of Yello Care program, they have undertaken several initiatives such as a collection of plastic bottles, and waste from our beeches for recycling, as well as using them for paving streets.

The Senior Manager for Sustainability and Social Impact for MTN Ghana Foundation, Robert Kuzoe made this known at the Launch of the Plastic Waste Recycling Campaign in Accra.

“The current campaign as part of our global appreciation week is an extension of our existing recycling initiative.

With respect to this campaign, our launch today seeks to extend education and the benefits of recycling to our communities. Our community recycling bins will be placed at selected MTN service centers across the country.

By reducing waste, lowering greenhouse gas emissions, and saving energy at home, at work, and on the road, we save the environment and our continent.

Recycling a ton of plastic saves energy equal to 5.774 kWh. That’s the equivalent to the amount of energy consumed by two people for a year.  It’s estimated up to 40 percent of oil consumption could be reduced through recycling plastic waste,”   he explained.

According to him, as a first phase, labelled bins will be positioned at the MTN head office and their Osu offices in Accra to collect the plastics, other locations within the regions such as Nhyiaeso, Kejetia, Takoradi Main, Market Circle, Koforidua, and the Wa Service Centers will follow suit. 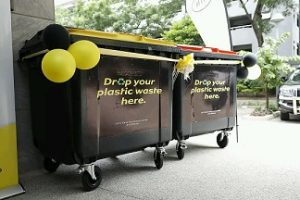 “We are confident that this initiative will help deepen gains made already by our activities over the years and move us closer to achieving SDG 11, which speaks to Sustainable Cities and Communities requiring us to make cities and human settlements inclusively safe, resilient, and sustainable.

MTN Ghana has an eco-responsibility as a key strategic pillar on its Environmental Social and Governance KPI Index,” he stated.

However, he entreated all who share in the vision of building a sustainable future to actively support the campaign to help transform the communities.

Mr. Felix Laryea, Administration Manager of Jekora Ventures Limited, applauded MTN Ghana for the collaboration, asserting that it will go a long way toward reducing plastic waste in the country.

He said, since 2017, the company has been collecting waste from MTN Ghana’s head office. We collected 15 metric tonnes of plastic waste from the head office, while we collected less paper waste.

According to him, 60% of Ghana’s waste is organic, 17% is plastic, and the rest is paper and liquid. This he said, his outfit is committed to supporting the course to abate plastic waste pollution in the country to ensure zero plastic waste in sight.

However, he advised Ghanaians at large as a matter of urgency to start practicing waste segregation.

Jekora Ventures Limited collects these separated wastes and recycles them into a number of household items.

Ghanaian highlife musician, Climate Change Activist, and the Ambassador for the Campaign Kwame Nsia Apau popularly known as   Okyeame Kwame in elation commended MTN Ghana for embarking on such a laudable initiative.

According to him, the campaign will ensure that the city’s surroundings are kept clean while also raising awareness about environmental cleanliness.

He also underscores the initiative’s economic and social significance, stating that it will result in job creation as well as a reduction in sanitation-related diseases.

He also urged Ghanaians to be responsible for their waste disposable and to be good corporate citizens to help manage and mitigate the growing nuisance of plastic pollution.

The seasoned musician also entreated all and sundry especially the youth to embrace the initiative since it will create job opportunities for them.